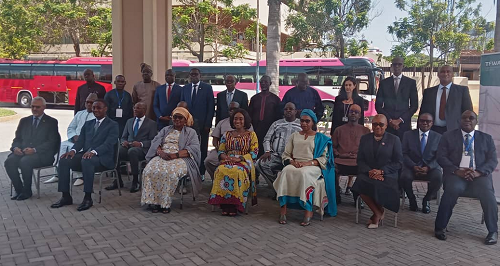 Finance Ministers in the ECOWAS region

Finance Ministers in the ECOWAS region last Friday held their Sixth Meeting in Accra, Ghana, to deliberate on the Community Levy.

The meeting was also focused on the consolidation of the ECOWAS Customs Union.

With the exception of Mali and Guinea which did not have any representative at the meeting due to their suspension from the regional body over military coup d'etat, the meeting was attended by the rest of the ECOWAS countries, as well as Directors-General of Customs agencies from 13 of the 15 member states.

The Sixth Finance Ministers’ Meeting was intended to help the participants to examine and approve the various community legislation, aimed at enhancing the fluidity of intra-community trade as well as to strengthen the ECOWAS Customs union.

The President of the ECOWAS Commission, Dr Jean-Claude Kassi Brou, in a speech read on his behalf, said ECOWAS member states needed to establish a stronger economic space, which allowed for the diversification of production and the reduction in the dependence on the export of a few primary commodities to improve economic growth rates, create employment and raise living standards of the people.

He said ECOWAS member states needed to hold each other’s hand in order to help drive the sub-region’s development in a holistic approach and also to ensure economic stability.

For him, it was worrying that in spite of the various legislations to make free movement of people and goods still remained a challenge, calling on all member states to abide by the region’s free movement policy.

Dr Kassi Brou said the implementation of the Community Levy and the Consolidation of the ECOWAS Customs Union would make the sub-region an economic power on the continent.

The Head of European Union Delegation to Ghana, Mr Irchad Razaaly, on behalf of the EU and other development partners in West Africa, assured ECOWAS of the EU’s readiness to deepen its cooperation with the region.

He said beyond trade and investment, “West Africa is strategic to Africa, to Europe and to the world.”

For him, the ECOWAS region “is the most advanced in the whole of Africa especially when it comes to free movement, common passport, common external tariffs, ECOWAS Trade Liberalisation Scheme, and the region’s achievement of a customs union since 2017,” Mr Razaaly observed.

In his welcoming address, Ghana’s Finance Minister, Mr Ken Ofori-Atta, in a speech read on his behalf, said with the implementation of the ECOWAS Common External Tariff (CET) in 14 ECOWAS member states and Mauritania and the advent of the African Continental Free Trade Agreement (AfCFTA), there was the need to reform other equally important trade facilitation and Customs Instruments to make the sub-region more economically sound and competitive.

He said the ECOWAS Community Levy was instituted on July 27, 1996 by Protocol A/P1/7/96 to replace the mechanism of annual financial contributions from member states, which was the main source of financing the institutions of the Community; adding that it entered into effective application in all ECOWAS member states on July 1, 2003.

That, Mr Ofori-Atta noted, following several years of implementation of this new financing mechanism, several shortcomings had emerged, in particular, the divergent interpretation of some of its provisions, which affected its effective implementation.

For him, there was the need to update the entire mechanism to accommodate changes in the institutional environment of ECOWAS and the international economic environment.

Considering the need to update the entire mechanism to accommodate changes in the institutional environment of ECOWAS and the international economic environment, Mr Ofori-Atta said, a new draft Supplementary Act setting out the conditions, modalities of application, monitoring and management of the ECOWAS Community Levy was proposed for examination and validation by technical experts, Directors General of Customs and Ministers Finance of ECOWAS member states at the Sixth Meeting.

The ECOWAS Commissioner for Trade, Customs and Free Movement, Mr Tei KONZI, said there was the need for customs hamornisation in the region to help facilitate trade and investment in the ECOWAS member states.