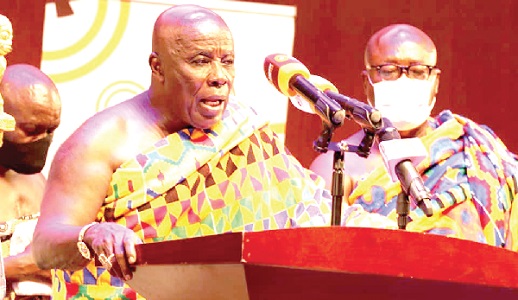 The Okyenhene, Osagyefuo Amoatia Ofori Panin, has called on African leaders not to place their private gain and interests above those of the people.

He said public office holders must refrain from thinking all about themselves and stop amassing illicit wealth at the expense of the people and the progress of their countries.

Speaking at a dinner held in his honour at the fifth World Organic Forum in Kirchberg/Jagst in Frankfurt in Germany last Wednesday night, the Okyenhene said the situation where African leaders misused public funds led to needless suffering and slow progress on the continent.

“As leaders, as we grow, we should understand that private gain must be put aside and we must begin to think about the public good. This is because when we think about public good, everybody wins and we are able to see the change our people are yearning for,” he said.

The dinner, which took place at the Kirchberg Castle and was organised by the Akademie Schloss Kirchberg, attracted a number of dignitaries, including the German Ambassador to Ghana, Daniel Krull; the Chairman of the Haus der Bauern Foundation, Rudolf Buhler, who is the Founder of the Akademie Schloss Kirchberg, and the Founder of the Research Foundation for Science, Technology and Ecology, Professor Dr Vandana Shiva. 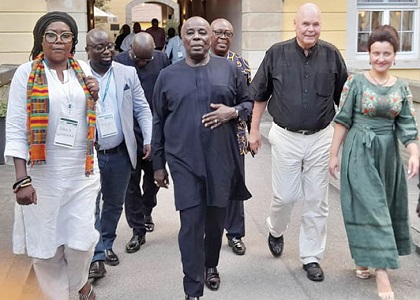 The rest were the Head of the Akademie Schloss Kirchberg, Prof. Dr Franz-Theo Gottwald; the Senior Manager of Global Policy at IFAOM-Organics International, Gabor Figeczky, and the Honorary President of the Club of Rome, Prof. Dr Dr Ernest Ulrich von Weizsacker.

Osagyefuo Ofori Panin said African governments must have a policy where leaders who watched over the public purse would be made to take their countries to the point he termed “enough point”.

“But, as it is now, public office holders amass wealth at the expense of the people. I do not mind those who have made the right investment and the ones who are disciplined enough.

“But we have a situation where public office holders amass illicit wealth and the consequence is that society and the community suffer,” he said.

“So even in business, keep what you can but have compassion and a sense of generosity, giving some of your private gain and personal profits for the public good,” he added.

Taking inspiration from the well-endowed German Kirchberg/Jagst city, Osagyefuo Ofori Panin said today countries had grown and communities had developed, not because of what those countries or communities had.

“It has always been what the countries know, harvesting of knowledge and ideas to change the world, and that is what African leaders should also understand and appreciate.

“We have plenty more than anybody else in the world; we have all the resources that God gave the planet, but we hold the enviable position of being the headquarters of poverty because we have not applied knowledge and ideas,” he lamented.

To initiate change, the Okyenhene disclosed that he and the German Ambassador to Ghana had discussed the possibility to offer hands-on training to the youth back home to bring about change.

Osagyefuo Ofori Panin expressed appreciation to the Founder of Akademie Schloss Kirchberg for the exceptional reception the founder and his wife had extended to him and his entourage.
“So we are going home, knowing that our host has treated us with great, great hospitality,” he said.

The Mayor of Kirchberg/Jagst city, Stefan Ohr, expressed his delight at having welcomed Osagyefuo Ofori Panin to the city.

He said the city had much to do with the UN Sustainable Development Goals (SDGs), and that it was implementing various climate-smart projects, such as renewable energy, to aid the achievement of the UN Agenda 2030.