The Auditor-General, Mr Daniel Yaw Domelevo, has asked the President, Nana Addo Dankwa Akufo-Addo to reconsider his directive for him to proceed on his accumulated leave.

According to him, although he was aware that his work was "embarrassing the government", the directive had "serious implications for the constitutional independence of the office of the Auditor-General."

President Akufo-Addo in a statement dated Monday, June 29, and signed by the Director of Communications at the Presidency, Mr Eugene Arhin, directed Mr Domelevo to take his accumulated annual leave of 123 days from Wednesday, July 1, and hand over all matters relating to his office to Mr Johnson Akuamoah Asiedu, the Deputy Auditor-General, to act as Auditor-General, "until his return from his well-deserved leave."

The statement explained that the President's decision was based on sections 20 (1) and 31 of the Labour Act, 2003 (Act 651) which apply to all workers, including public office holders such as the Auditor-General.

But in a three-page letter dated July 3, 2020, and addressed to the Secretary to the President, Nana Bediatuo Asante, Mr Domelevo noted that although he has since taken his accumulated leave days as directed, the action by the President was unconstitutional and not in the best interest of the office of the Auditor-General and for that matter the country.

"I think it necessary, however, to bring to the attention of the high office of the President a few matters relevant to our constitutional governance, due process and the rule of law... My knowledge of recent labour law and practice in the country is that no worker is deemed to have accumulated any leave on account of their having failed, omitted, neglected or even refused to enjoy their right to annual leave, which the law guarantees for their benefit, not the employer.

"To the best of my knowledge therefore, where in any given year a worker fails, omits, neglects or even refuses to take their annual leave, such leave is deemed forfeited with no corresponding obligation on the part of the employer to enforce the worker's right to take their leave by assuming, deeming or declaring the forfeited leave, accumulated," the statement said.

It added that the action by the President was in bad faith as "the office must have been aware also that several appointees of the President, have not, since the year 2017 taken their annual leave to date."

"The direction therefore that I proceed on leave, oblivious of the other workers similarly circumstanced, gives the impression that the decision is not taken in good faith," the statement said.

Below is a copy of Mr Domelevo's response 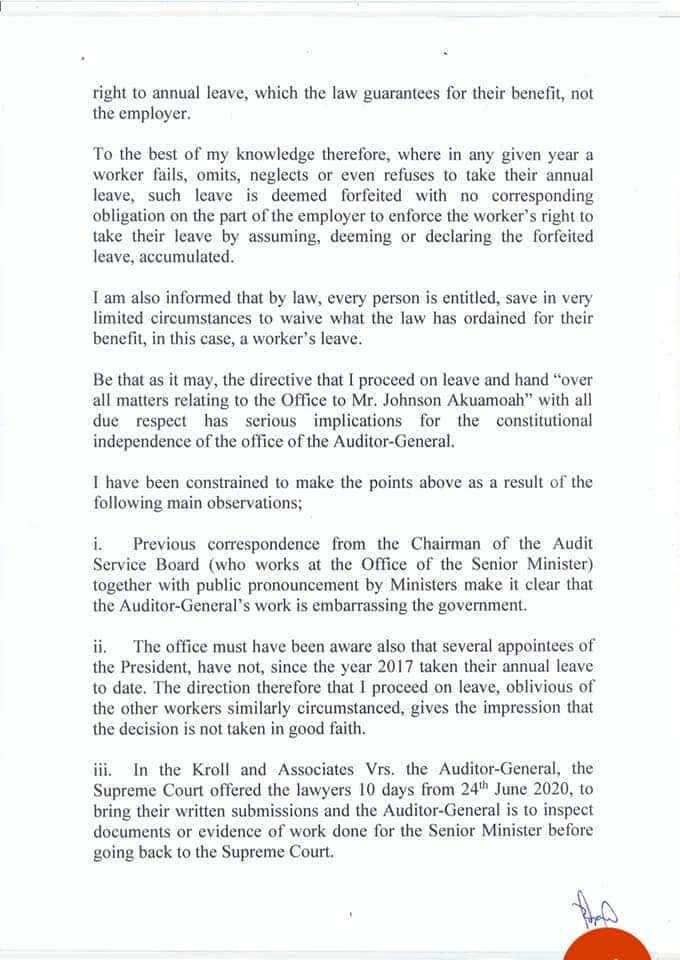