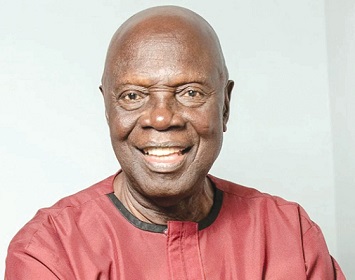 A management consultant, Ishmael Yamson, has urged those in leadership positions to demonstrate the highest levels of integrity and discipline that many Ghanaians are yearning for.

He said whether or not one found oneself as a leader in political, corporate, church or family spheres, people must never compromise on their integrity in order to solve problems and build the country.

“For the young people who are coming up and for the leaders of our country and leaders in our corporate world, unless you can uphold highest levels of integrity, you can forget about success because you cannot lead without integrity,” he said.

Speaking at the maiden edition of the inter-generational dialogue in Accra yesterday, Mr Yamson said the absence of many leaders, who were interested in building the country, had largely contributed to Ghana’s slow progress.

“I can say that we have more leaders in this country who have not built than those who sought to build and that is why we are where we are today.

“And I need to say that my generation and the generation that will come, we need to change this mindset that leadership is about positions, honour and glamour. Leadership is neither of these but it is about you making things better than you found it,” he stated.

The event brought together a number of personalities who have demonstrated achievements in different facets of society to inspire the youth. They included the clergy, entrepreneurs and the military.

It was organised by Passionate African Leadership Institute (Pali) Global, a leadership-nurturing, talent-incubating entity with a strong emphasis on inter-generational congruence and ideation.

Mr Yamson expressed his frustration that in Ghana currently, many leaders had not demonstrated enough vision and integrity in the way they had managed the country.

In his view, many leaders had just failed to deliver what they promised the people.

He, therefore, reminded leaders that in every country in the world, leaders were not appointed for fun.

“You are appointed to solve problems and make the life of the citizens better,” he stated.

He pointed out that Africa was such a prosperous continent but such prosperity had eluded its people.

“IMF bailout should make us ashamed”.

For instance, he said the government of Ghana, a country endowed with abundant natural resources, should be ashamed going to the International Monetary Fund for the 18th time.

He stated that poor nations only resorted to seeking IMF bailout when their economies had been destroyed.

“So, for the past 17 times that we were reckless with our economy, did we not know that we have lessons to learn and that for once, we could say our vision is never to return to the IMF?

“This should mean we will run our country in such a way that there will be no need to seek bailout as we do not need anybody’s money in Ghana to run this country,” he said.

Mr Yamson, who is now 80 years, also noted that Ghana’s economy was facing dire financial constraints due to bad decision leaders of the country had taken over the years, causing the country to lose control over its own gold assets.

“When our leaders sell all our shares in all the gold mining companies in Ghana and leave them to the foreigners then we complain the foreigners are taking our money away,” he said.

Perpetual bad decisions by African leaders, Mr Yamson added, had caused the African not to enjoy its own natural resources over the years.

“Africa has been in search of prosperity for many decades yet the continent is still the poorest in spite of being the richest continent.

Expressing disappointment over the level of hopelessness facing many young Africans, Mr Yamson said today, many graduate from universities across the continent only to be unemployed for many years.

“So, the young people in Africa have a huge problem and that is why the leadership in Africa must wake up and think about young people,” he said.