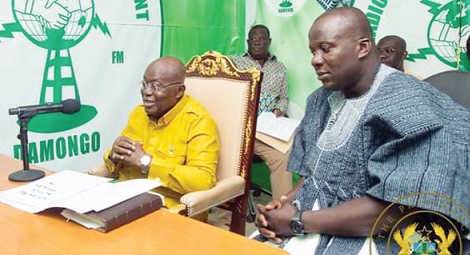 President Akufo-Addo (left) speaking on PAD FM. With him is Samuel Abu Jinapor, MP for Damongo and Minister of Lands and Natural Resources
30.5k Shares

The decision to seek an International Monetary Fund (IMF)-supported programme cannot be blamed on the government, President Nana Addo Dankwa Akufo-Addo has said.

He said while a section of the public blamed the government for mismanaging the economy, the situation was way beyond the making of the government, as it was occasioned by current global crises which had not spared other economies around the world.

“In fact, the big difference that we are having in Ghana today and why we have gone back to the IMF is that everybody recognises it is not as a result of my mismanagement, as was the case during the tenure of the previous government.

“The reality is that there are global inflation, high commodity prices, among others, and all these have been the principal reasons for the difficulties we are having as a country,” he said.

President Akufo-Addo said this in an interview with Damongo-based PAD FM in the Savannah Region yesterday as part of his two-day tour of the region.

Notwithstanding the challenges, he indicated that the government was determined to find a solution to the situation to help bring relief to the citizenry.

Following a directive from President Akufo-Addo to the Finance Minister, Ken Ofori-Atta, the country, on July 1, 2022, started discussions with the IMF to support a homegrown economic programme through an IMF arrangement.

The IMF, in a statement, said it stood ready to assist Ghana to restore macroeconomic stability, anchor debt sustainability, promote inclusive and sustainable growth and address the impact of the war in Ukraine and the lingering COVID-19 pandemic.

An IMF team was in Accra from July 6 to 13 to begin initial discussions with the Ghanaian authorities on a possible IMF-supported programme.

“Even though we are still at an early stage in the process, the mission was constructive and kick-started the process, laying the ground for our continued engagement,” the IMF said after the Accra discussions.

IMF staff will continue to monitor the economic and social situation in the country very closely and engage with the authorities to formulate a homegrown reform plan that can be supported by an IMF arrangement and validated through broader stakeholder consultations.

Addressing the people of Damongo via the local radio station, the President said in spite of the current economic difficulties, the government was delivering on its promises.

“You can see that a lot of work is ongoing across the country and a lot more is yet to be done before I leave office,” he said.

He stressed that the government was much focused and systematically addressing the challenges facing the country.

“As a government, there is always room for improving the quality of your output, but in all, we are coming to grips with what needs to be done and I see that happening,” he said.

Touching on roads, President Akufo-Addo indicated that 156 road projects were ongoing in the Savannah Region, with about 29 already completed.

“For the first time in the history of Damongo, the Savannah Regional capital has got asphaltic roads all over the place. We never got that, so you can see that there is a deliberate attempt to improve on road infrastructure in the region.

“I think we should all tell the truth that the extent of road development that is taking place here, which is the home region of my opponent, is something which has never happened before,” he noted.

On the Damongo Water Supply project, he indicated that the government had taken steps to commence work on it as soon as possible to help address the perennial water crisis in the area.

On Wednesday, July 29, 2020, the President cut the sod for the construction of the $49-million Damongo Water Supply project to meet the water demands of Damongo and its surrounding communities.

However, work is yet to start on the project, and the President attributed the delay to the COVID-19 outbreak and some bureaucratic barriers.

“The COVID-19 affected the delivery of most projects and the difficulties that came from the point of view of the financiers, but what I can say is that now virtually every bureaucratic step that needs to be taken to bring the project on stream has been done, and I can say with considerable confidence that by the end of this year, the Damongo Water Supply system will be completed to deal with the water situation for the people,” he asserted.

He is expected to inspect and inaugurate some projects, as well as pay courtesy calls on some chiefs in the region.

He has also held a meeting with municipal and district chief executives, as well as Savannah Regional executives of the New Patriotic Party (NPP).