Day and Boarding house for pets 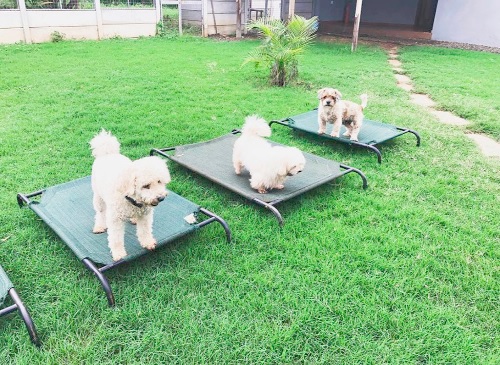 The old saying that wonders never end has been put to practice at Madina in Accra.

There is a facility which provides pets with day and boarding care for clients at a fee.

This could be for as long as their owners want.

The dogs are fed according to the instructions of their veterinary doctors and owners and have access to a swimming pool.

Owners have the choice for their pets to be kept alone in their kernel or with other dogs or a shared room. 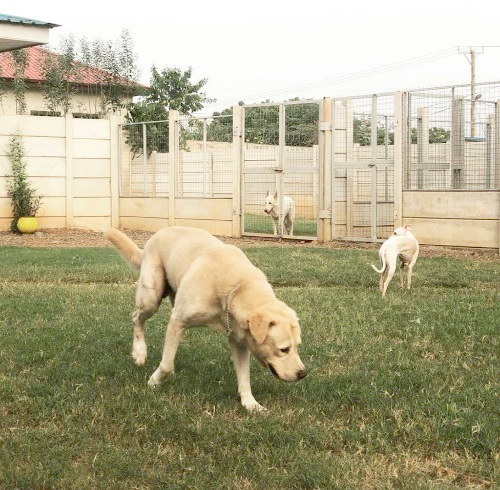 Some dogs having fun on the playground

There are 12 kernels available.

Pussy cats have a room to themselves, with additional facilities such as ceiling fans to keep them cool and play things to keep them occupied.

For dogs, such services are influenced by their size and weight.

For instance, keeping a dog under 20 kilogrammes costs GH¢60 a day.

This is negotiable for longer stay.

The fees are negotiable for pussy cats too.

Mr Kwame Amakye Sackey, who is the manager of this facility known as Village Pets and Garden, says he developed interest in this business because he was close to his father who started it about five years ago.

Now 38, he has been involved with other business which relates to pets for 20 years.

For instance, he has been helping his father to run pet shops.

Mr Sackey said before the pets were admitted to the house, the owners had to fill a form indicating the name of the pet, its age, likes and dislikes and specify its diet.

The details also include the contact of the veterinary doctor to call in case of an emergency while the pet is in the care of the house.

Some dogs are brought for a short stay during the day just to be entertained because they are bored at home.

The dogs have access to a playground which includes a specially designed pool that allows them in and out on their own, with their safety guaranteed.

During my visit, I met Rexy, a four-year-old mastiff which has been living at the facility for close to a year now because its owner who works abroad and has not been able to return to the country due to the challenges posed by the COVID-19 pandemic. 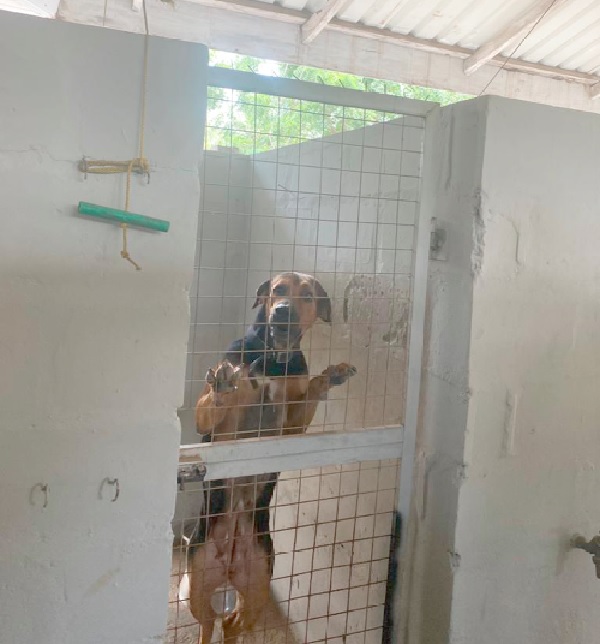 Sally, a mastiff mix, stretches out when he heard the sound of the door to the house open

I also met J J, a great Dane, which was all over me trying to make friends with me.

When it raised its paws into the air, he towered above me, though I am 1.65 centimetres.

Sally, a dog which was found roaming the streets, had been adopted by Mr Sackey. There were also a Toy pom, a maltese and a pitbull whose face portrayed a readiness to make minced meat out of me.

I sought comfort with Lolo, a siamese cat who was yearning for a cuddle from Mr Sackey; and she had just that after which she went swinging on the ropes she has become used to, being a guest for four months.

Mr Sackey describes how emotional it is for both pets and their owners to say good bye when owners are leaving them at the facility.

“Sometimes after check-in and the finalisation of the admission process, the owners find it so difficult to leave and you find them hanging around just to see how their pets are coping in their new environment. It is just like a first day at school experience for toddlers; very emotional”, Mr Sackey recounts.

There is a three-member staff, including a security person, who are well trained to groom, feed and make sure that their guests feel at home at the facility.

Mr Sackey explains that the facility has been running for about five years after his father acquired it from some expatriates who were leaving the country.

Asked about the challenges he faces, he said some owners sometimes left their pets longer than stipulated and that put a strain on the finances of the house.

The manager says that he keeps going because of his passion for the job and because of his background in animal husbandry in spite of the difficulties posed by COVID-19.

It seems that the pet culture in the country is becoming sophisticated as more people seem to be acquiring foreign breeds of dogs and cats.

For some, it is a status symbol while for others such dogs are good company.

For others, dogs provide security as their presence alone scare away potential intruders.

Dogs have always been described as man’s best friend. It is, therefore, little wonder that such facilities are springing up.

This facility is also a pure example of how creativity has been used to create a business which has provided employment for some youth.

Ministry of Employment and Labour Relations, Ministry of Food and Agriculture