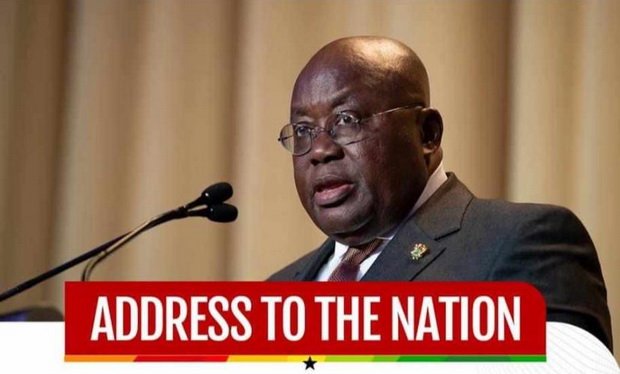 The ban on all public gatherings has been extended to the end of this month, President Nana Addo Dankwa Akufo-Addo has announced.

In his eighth address to the nation to give an update on Ghana’s enhanced response to the COVID-19 pandemic last night, he said: “During this period, there will continue to be a ban on public gatherings, such as the holding of conferences, workshops, parties, nightclubs, drinking spots, beaches, festivals, political rallies, religious activities and sporting events. All educational facilities, private and public, continue to remain closed.”

Also he said the ban on funerals and the conduct of private burials with not more than 25 people would still hold.

President Akufo-Addo said the police were arresting and prosecuting people, irrespective of their status in society, who flouted the regulations on public gatherings, insisting that that was the way to go.

“We cannot allow a few persons, for their narrow, selfish interests, to jeopardise the health, well-being and safety of the larger population. If you fall foul of the law, you will face its full rigours,” he warned.

The President said it was not his intention to see the restrictions continue, in view of the difficulties that they brought on the public.

Explaining, he told Ghanaians: “I, like you, would love to see an end to these restrictions. I know the difficulties each and every one of you has been through over the last two months.

“You have had to alter completely your way of life; you have had to stay at home, except for specified purposes; you cannot travel outside the country; you cannot go to church, and you had to cancel activities usually associated with Easter. In this Holy Month of Ramadan, our Muslim brothers and sisters are having to pray at home, instead of congregating at the mosque, and foregoing the public celebration of the Eid.”

He also mentioned how parents have had to bear the extra burden of providing care for their children who were currently at home, instead of being in school.

Additionally, he said operators of trotros, taxis, buses, markets, hotels, restaurants, bars and nightclubs had all lost the patronage of their clients, a development that had led to the loss of incomes.

Besides, he said, a good number of people had lost their jobs because of the impact of the virus on the economy.

“Most of us want to hang out with our families, friends and loved ones in a social setting, but cannot. As uncomfortable as these restrictions have been, we have no option but to stay the course,” he said.

President Akufo-Addo gave the latest update on the case count to be 4,700, with five persons in critical condition, 494 recoveries and 4,179 people responding to treatment.

He said the death toll had risen to 22.

Those figures, he indicated, were from the 160,501 tests conducted as of yesterday.

He said the backlog of samples for testing was cleared last Friday, meaning that the figures were real time results given on a daily basis since last Friday.

The President said the decision to conduct more tests had helped in finding the positive cases to isolate, treat and curb further person-to-person spread.

“We must understand that the more people we test for the virus, the more persons we will discover as positive, and, thus, have the opportunity to isolate and treat them.

“If you do not test people for the virus, you will not find the persons who are positive, let alone isolate them from the population and treat them and prevent them from spreading the virus.

“Indeed, had we not been proactive in undertaking enhanced contact tracing of infected persons but had relied solely on testing persons who reported to hospital, which is the practice followed by some other countries, that is, routine testing, our total case count would have stood at 1,413. The 3,232, that is, two-thirds of the population of positives, would have been undetected and still be within the population, unknowingly infecting others,” he explained.

President Akufo-Addo intimated that the rapid implementation of all the policies had resulted in our low infection, hospitalisation and death rates, some of the lowest in Africa and the world, saying those policies were to be replicated in some countries.

“We, certainly, must be doing something right in Ghana. Our country has administered more tests per million people than any other country in Africa, and, in fact, the World Health Organisation has reached out to us to share our sample pooling experience with other African countries, so they can adopt this strategy and also ramp up their testing capabilities.

“It is, thus, vital that we continue to maintain the measures of enhanced hygiene and social distancing protocols to contain the spread of the virus, as they are the surest way to a quick return to a life of normalcy,” he emphasised.

He said respecting the restrictions was not just for the good of individuals but also to lessen the workload on health workers, who continued to put in their maximum at the forefront of the fight against the disease.

In all the developments, he said, the government would not deviate from the path to bring some relief to the people.

He said, for instance, that in addition to the incentive package instituted for all healthcare workers, the government had so far distributed a number of items to healthcare facilities across the country.

“Further, we have extended this gesture to other frontline actors engaged in the fight, with the presentation of 5,000 PPE to members of the media, and {today}, Monday, May 11, 10,000 domestically produced nose masks and more money will be delivered to the National Commission for Civic Education (NCCE) to enhance its capacity to undertake the important work it is already doing,” he said.

He congratulated healthcare workers on their “heroic contribution” to the fight against the pandemic.

President Akufo-Addo said he had chaired a three-day Cabinet retreat at the Peduase Lodge over the weekend to examine in detail measures aimed at reviving and strengthening the economy.

“I am happy to reiterate that the government is putting in place a resilience and recovery plan, with the overarching aim of finding more resources to strengthen the productive sectors of the economy to ensure sustained economic activity.

“We are rolling out a soft loan scheme of GH¢600 million, in this month of May, to support micro, small and medium-scale businesses, and, as you know, the commercial banks, with the support of the Bank of Ghana, have also instituted a GH¢3-billion credit and stimulus package to help revitalise industries, especially in the pharmaceutical, hospitality, services and manufacturing sectors,” he said.

In addition, the President indicated that the Minister of Finance was working tirelessly to find additional resources to supplement the amounts, including the resources to finance the construction of 88 district hospitals, the ‘Agenda 88’, and seven regional hospitals.