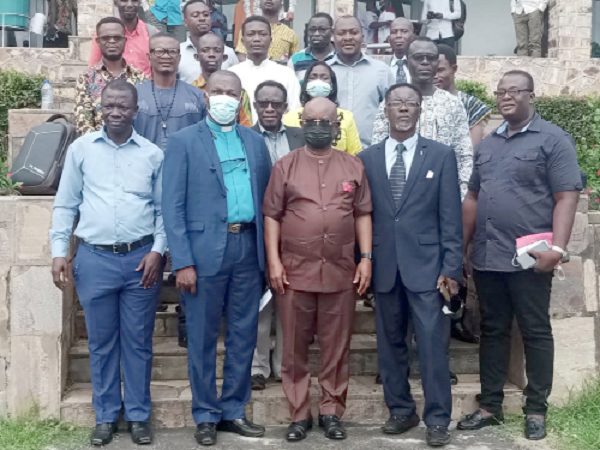 Dr Letsa (middle in front row) with some clergymen and journalists after the briefing. With him is Rev. Seth K. Mawutor, Chairman of the Planning Committee (2nd from left)

The Volta Regional Minister, Dr Archibald Yao Letsa, has reiterated that contributions towards the construction of a national cathedral is not compulsory but optional.

The minister’s statement was in response to questions posed by some participants about the zeal with which efforts were being made to put up the edifice as the country grappled with youth unemployment.

At a press briefing on fund-raising efforts for the cathedral in the Volta Region last Wednesday, Dr Letsa said although the cathedral would contribute much-needed revenue to the national kitty, no Ghanaian was under compulsion to donate towards the project.

A launch of a fund-raiser has been scheduled for Wednesday, November 24, at the Dela Cathedral of the E.P Church in Ho.

Dr Letsa said: “This is not a task being imposed on Ghanaians.

It is an appeal for people to contribute. So, you are at liberty to either contribute or not.

If you are willing to give, Ghanaians are welcome to come on board.”

“My wife and I have agreed to give GH¢20,000 because I know the blessings I’m going to get from that.”

The briefing brought together members of the Clergy, journalists and members of the regional planning committee of the national cathedral fund-raising, including its chairman, Rev. Seth K. Mawutor.

Dr Letsa, therefore, called for decorum in discussions on the significance of a national cathedral to the country, saying the tangent of the discourse must not seek to divide Ghanaians nor taint its focus with partisan politics.

The regional minister said the construction of the cathedral, which was in progress, would serve several other purposes, which would inure to the benefit of the country.

The $250 million edifice is expected to be commissioned on March 6, 2024 and would consist of meeting rooms, chapels, prayer rooms, the Bible Museum of Africa, Bible gardens, baptistery, specialised library, learning centre, a main auditorium, and serve as a national point of convergence.

It is also expected to serve as an important tourist attraction to Ghana.

Secretary to the national cathedral committee, Rev Dr. Eric Affram, who announced the date for the region’s fundraiser, in a statement described the initiative as an act of thanksgiving and a symbol of eternal gratitude to God.