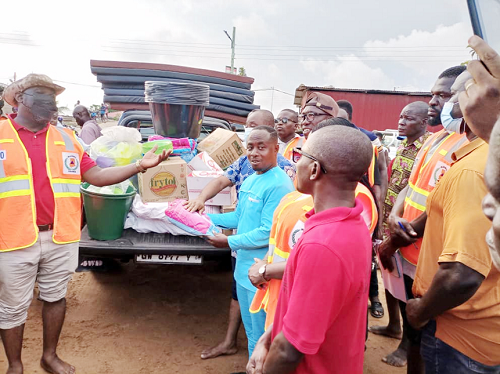 Some relief items have been delivered to some displaced residents in the three coastal districts affected by tidal waves in the Volta Region.

The items procured by the National Disaster Management Organisation (NADMO) were handed over to the Keta and Ketu South municipal chief executives (MCEs) and the Anloga District Chief Executive (DCE) for onward distribution to the affected residents.

Officials of NADMO had indicated that although the relief items were inadequate for the over affected 4,000 people, it was a first tranche delivery.

The acting Regional Director of NADMO, Mr Ebenezer Azumah, explained to the Daily Graphic that the distribution was priority-based for those who had been hardest hit by the disaster, numbered 87.

"We have been able to satisfy almost all the people who have been hardly affected," he added.

"We have made a call for more support and it is being received positively. A lot more people are interested in this call. We would continue to engage them," Mr Azumah said.

Meanwhile, some of the displaced residents are making do with community centres and church facilities as shelter for the time being.

About 50 households are being housed in a community centre at Kedzi and 20 others in a church building at Anloga.

Some of the affected residents described the situation as dire and a ticking time bomb with the propensity to degenerate into a more serious humanitarian issue unless the government did more to mitigate the current situation.