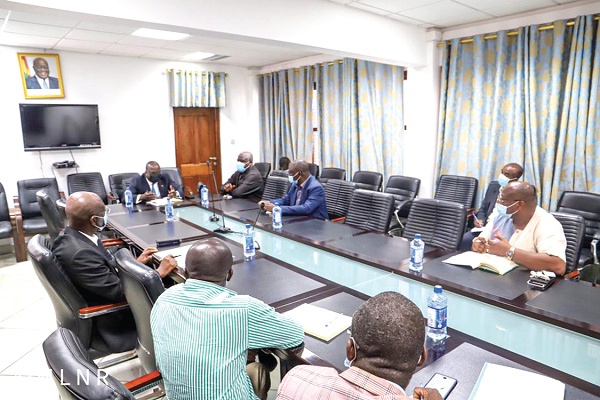 The Minister of Lands and Natural Resources, Mr Samuel Abu Jinapor, has set up a five-member committee to take inventory of the excavators and other equipment that were seized over the past four years in the fight against illegal mining.

The committee is chaired by the Advisor on Mines to the Minister at the Lands and Natural Resources Ministry, Mr Ben Aryee.

Other members are from the Minerals Commission and the Environmental Protection Agency (EPA).

It has been tasked to present a detailed report within one week.

Additionally, the committee is to peruse the report of the Inter-ministerial Committee on Illegal Mining (IMCIM) and oversee the proper handing over of all documents to the Lands Ministry for prompt action.

The Public Relations Officer of the Lands Ministry, Mr Abraham Otabil, who disclosed this to the Daily Graphic, said the minister had given the directive at his maiden meeting with directors and top officials of the ministry in Accra yesterday.

He said Mr Jinapor urged officials of the ministry to demonstrate loyalty, transparency and teamwork at all levels to help tackle illegal mining and other challenges in the lands and natural resources sector.

"The minister assured the officials of the necessary support in their work to achieve the agenda of the President in the sector for the development of the country," Mr Otabil said.

According to him, the minister would hold similar sessions with various agencies under the ministry to discuss pertinent issues in the sector.

In 2017, President Nana Addo Dankwa Akufo-Addo made a promise to fight galamsey head on, even if it would cost him the next election.

Subsequently, a ban was placed on all forms of small-scale mining in the country as a measure to sanitise the sector.

That was followed by the deployment of Operation Vanguard, a joint military and police team to mining communities to crack down on the activities of illegal miners.

Other measures included the setting up of the IMCIM to oversee the galamsey fight.

In the course of the fight against galamsey activities, the Operation Vanguard taskforce seized some excavators and mining equipment.

The Chairman of the IMCIM and Minister of Environment, Science, Technology and Innovation at the time, Professor Kwabena Frimpong-Boateng, said 500 of the seized excavators had gone missing.

However, when Mr Jinapor appeared before the vetting committee of Parliament last two weeks, he assured the committee and the people that if approved as Minister of Lands and Natural Resources, he would take steps to unravel the mystery behind the missing excavators.

Ministry of Lands and Natural Resources