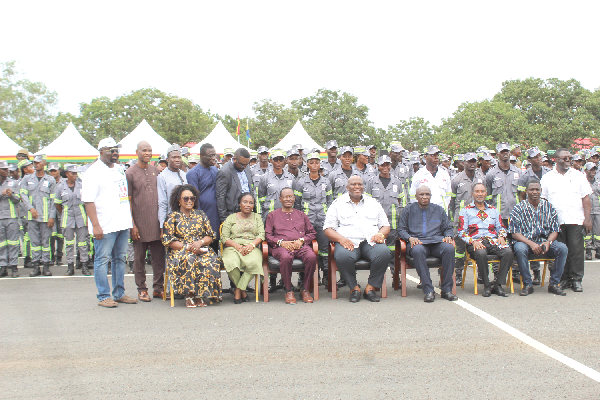 The first batch of the 3,500-member City Response Team (CRT) who will be deployed across the Greater Accra Region to enforce by-laws on sanitation and discipline has passed out in Accra.

The 867 recruits will assist the 29 metropolitan, municipal and district assemblies (MMDAs) in the region, as well as the security agencies, in the areas of traffic management and education on waste management practices and ensure discipline in respect of selling and parking at unauthorised areas within the assemblies, especially in the central business district (CBD) of the capital.

The team will also support the enforcement of by-laws on the cleaning and greening of frontages under the ‘Operation Clean Your Frontage’ campaign.

The campaign seeks to make it obligatory for all owners of residential and private properties and public institutions and the citizenry to be responsible for the cleaning and greening of their frontages, as well as all open spaces around their properties.

The initiative, which forms part of the ‘Let’s Make Greater Accra Work’ agenda, was launched on October 21, last year by President Nana Addo Dankwa Akufo-Addo, with the aim of addressing sanitation and waste management issues confronting the national capital and make Accra the cleanest city in Africa.

The passing out of the team comes after the members had successfully completed a one-month rigorous training at the Army Peace Operations Training School at Bundase, where they acquired basic knowledge in drills, crowd control, very important person (VIP) protection, personal security, sanitation by-laws, civilian relationship, among others.

The ceremony, which took place at the parade ground of the Fifth Infantry Battalion (5BN) at Burma Camp, allowed the cohorts to mount drills to display, practically, the skills and knowledge they had acquired during their training, to the admiration of the crowd.

Four of the recruits who had excelled in various disciplines during their training were honoured.

Ernestina Afriyie, who won the best in the Bravo Company, emerged the overall best.

The event attracted a large gathering of people from all walks of life, a reflection of the enormous goodwill the government’s efforts to make Accra the cleanest city in Africa is enjoying.

Personalities at the event included the Minister of the Interior, Ambrose Dery, who represented the President; the Greater Accra Regional Minister, Henry Quartey; the General Officer Commanding the Southern Command, Brigadier General Michael Amoah-Ayisi; ministers of state, chief executives of MMDAs and members of the Parliamentary Select Committees on Defence and the Interior, Environment, Science and Technology and Local Government and Rural Development.

Others were representatives of the security agencies, a large entourage of traditional rulers from the various traditional councils in the Greater Accra Region, as well as the Executive Chairman of the Jospong Group of Companies, Dr Joseph Siaw Agyepong.

Mr Quartey said ‘Operation Clean Your Frontage’ was born out of the desire to bring back the “saman saman” concept of old, whereby the citizenry were responsible for cleaning their immediate environments.

“The mere hearing of the name ‘Papa Town Councillor’ was enough to send our mothers running helter-skelter, putting things in order in their compounds and frontages in order not to incur the wrath of the local authorities,” he said.

The regional minister said as part of the implementation and sustainability strategies to curb indiscipline and improve sanitation practices, it became imperative to constitute a CRT as a long-term plan to maintain discipline and order in the capital.

Mr Quartey, therefore, expressed the hope that given the discipline instilled in the recruits by the Ghana Armed Forces, discipline on the principal and major roads would improve and there would be a reduction in the indiscriminate dumping of waste in open spaces and in waterways.

While assuring the CRT recruits of the government’s commitment to support them with the needed resources and logistics, he warned them not to abuse the opportunity afforded them.

“Let me use this opportunity to send a strong caution to anyone of you who would want to take the law into his or her own hands to go outside your scope of work that you will not be spared.

“You must be guided by your code of conduct and the by-laws in the discharge of your duties; do not arrogate to yourself any power that has not been vested in you,” he warned.

Mr Dery said the government was committed to sustaining the peace and security to enable citizens to go about their businesses safely and also attract investment into the country.

He, therefore, urged Ghanaians not to do anything to detract from the “noble path we have taken for ourselves and posterity, as peace and security are very paramount in the development of any nation.”

“I further urge you to always work within the confines of the law. You must see the citizenry as partners and you must endeavour to improve on your relations with them, as you are friends but not enemies,” he stated.

Brigadier-General Amoah-Ayisi urged the recruits to discharge their responsibilities without “fear or favour” in order to help achieve the objectives set out for the campaign.