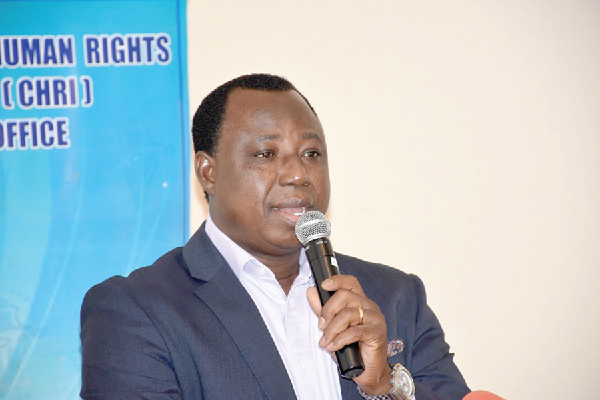 The Commission on Human Rights and Administrative Justice (CHRAJ) has entreated Parliament not to come up with a law that will violate the fundamental human rights of people and institutions, as guaranteed in the Constitution, as public hearing of the Anti-LGBTQI+ Bill goes on in Parliament.

“The Constitution guarantees the expression of interest and freedom of association, movement and speech, all of which are fundamental human rights; therefore, Parliament must propose the requisite amendments to the bill in order not to infringe on the rights of other people,” the commission said.

It, however, observed that per the current stature of the bill, any individual or organisation, such as the media, that advocated or empathised with LGBTQI+ persons risked having his or her human rights curtailed, as he or she would be criminally sanctioned.

Appearing before the Constitutional, Legal and Parliamentary Affairs Committee of Parliament in Accra yesterday, the Commissioner of CHRAJ, Mr Joseph Whittal, said: “I feel Parliament, as well as this committee, may need to be careful on the bill.”

“I think that freedom of expression and of the media is an area we should be careful of as this committee critically assesses the bill, otherwise there is a likelihood that the whole law that may come out may be subjected to certain challenges at the Supreme Court, which will be unnecessary if we do the needful,” he said.

According to the commissioner, CHRAJ was neither for nor against the bill on LGBTQI+ practice in the country as the three-member delegation of the commission answered questions on the eight-page memorandum it had submitted to the committee.

He said Section 104 of the Criminal Code of Ghana had already criminalised the acts of LGBTQI+.

He, therefore, wondered why similar provisions would be added in the new bill to criminalise other persons who were associated, in one way or another, with LGBTQI+ practitioners.

“If you think Section 104 is sufficient or not, we can make an amendment of that provision to make it sufficient to deter people along those lines, but not to open up anyone such as me, as the Commissioner of CHRAJ with the mandate to promote human rights.

“If I decide to speak on behalf of the minority and the vulnerable, then I am opening myself up to possible criminal prosecution, and why will that be? So we need to be careful as we consider the bill,” Mr Whittle added.

He pointed out that Ghana being a member of the UN General Assembly, it was subject to the jurisdiction of that committee which had included sexual orientation as a human right.

He further said if the nation sought to do away with certain backward cultural practices, including LGBTQI+ practice, which the bill sought to outlaw or prohibit, “why do we not take the non-criminal perspective, using institutions such as CHRAJ and the National Commission on Civic Education (NCCE) to effect the necessary change?”

He also reminded the committee that Ghana was touted globally as a champion of the Sustainable Development Goals (SDGs) which were anchored on human right conventions.

“Any law, practice and attempt at doing something contrary to protecting them, exposing them to stigma and discrimination are going to create a situation where we will be leaving LGBTQI+ behind,” Mr Whittal added.

Earlier, four of the eight MPs who sponsored the bill also appeared before the committee to make justifications for the object and principles of the Promotion of Proper Human Sexual Rights and Ghanaian Family Values Bill, 2021.

The four, all from the opposition National Democratic Congress (NDC), were the MP for Ningo-Prampram, Mr Samuel George; the MP for Ho, Mr Emmanuel Bedzrah; the MP for Krachi West, Mr Helen Adwoa Ntoso, and the MP for South Dayi, Mr Rockson-Nelson Dafeamekpor.

Also appearing before the committee were the National Coalition for Proper Human Sexual Rights and Family Values, the Ghana Catholic Bishops Conference and the Coalition of Muslim Organisations of Ghana.

The proponents and the opponents of the bill offered justification why Parliament should either pass or reject the bill.