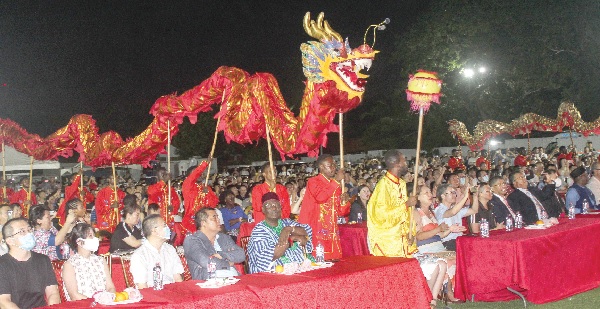 Thousands of Chinese living in Ghana converged on the forecourt of the State House last Friday to celebrate the Chinese Luna New Year, also known as the Year of the Rabbit.

The Year of the Rabbit is considered a year of new beginning, newness and a prosperous year for Chinese.

The celebrants joined other Chinese around the world to celebrate the New Year with a gala night sponsored by Access Bank.

Performing on a colourful dais decorated with red Chinese paraphernalia, students from two Confucius institutes treated the audience to a traditional Chinese dance, known famously as the dragon dance, and some other song performances.

The celebration was interspersed with a raffle draw where 800 people won prizes which included bedding set, laptops, air-conditioners, plane tickets and cash prizes.

Mr Hammond, in brief remarks, described the year 2022 as a difficult one due to COVID-19, saying it affected policies in both countries, but stressed that the partnership between the two countries pulled them through.

He expressed the belief that the new year was the time for the two countries to come together to support each other.

"I can confidently say that the year 2023, the Year of the Rabbit, which I am told is a very wise animal, a smart animal that brings fortune and great success, will bring Ghana and China closer together despite the challenges that we have faced on many fronts," he said.

Mr Kun also reiterated the importance of the celebration to the Chinese, and said the new beginning would bring forth stronger bilateral ties between Ghana and China.

The President of the Association of Chinese Society of Ghana, Tang Hong, expressed the confidence that despite the economic challenges, the new year would bring greater economic and trade cooperation between the two countries.

“For decades, the Chinese community has been an integral part of the Ghanaian society.

We have been industry players in trade and commerce, and have made substantial contributions to the Ghanaian economy.

“Together we can continue to prosper through hard work and fortitude.

It is my hope that the Year of the Rabbit will bring good fortune, peace and strength to all of us,” he said.

Mr Olatunji also said his outfit was pleased to be associated with the Chinese community in Ghana, and stressed that they looked forward to facilitating trade between the two countries.

The event was climaxed with fireworks display and music.