Chamber of Commerce calls for collaboration to resolve challenges 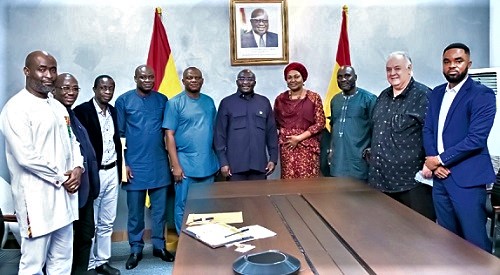 The Ghana National Chamber of Commerce and Industry (GNCCI) has cautioned that the twin problem of inflation and the vulnerability of the cedi requires a collective and a well-coordinated effort to ensure that measures being instituted by the government yielded the required results.

The President of the GNCCI, Clement Osei-Amoako, who was speaking during a call on the Vice-President, Dr Mahamudu Bawumia, at the Jubilee House last Friday, said “the current demand approach by the central bank in tackling the challenges was not yielding results due to supply sources of the problem.

Mr Osei-Amoako, however, commended the government for ensuring stability between 2017 and 2019, but said it was unfortunate that the recovery process after the COVID-19 pandemic was also facing severe challenges and thereby collapsing the business of members of the chamber.

The GNCCI delegation included the First Vice-President, Victoria M. E. Hajar; the Second Vice-President, Stephane Miezan, and the Chief Executive Officer (CEO) of GNCCI, Mark Badu-Aboagye, and other members of the Chamber.

The President of the Chamber, Clement Osei-Amoako, led the team.

The visit was to enable the GNCCI to share its views on how to deal with the present economic challenges confronting the world and how it intended to assist the government in its plans to assist the business community.

“The fuel effect, food and energy and imported inflation are beyond the policy control of the Bank of Ghana and so the chamber wants to be abreast of what the government has done so far to resolve the issues so that the GNCCI can also support in that direction,” Mr Osei-Amoako explained, adding that “as a business support organisation, we find this approach essential to enable us to leapfrog our development stage.”

The GNCCI President also pointed out that the regulatory environments, high cost of capital, taxes and cost of electricity, among other obstacles, were undermining the competitiveness of businesses in Ghana. He said, “the Chamber’s evidence-based advocacy in addition to engagements with the business community and policy makers had shown that the critical issues affecting the private sector required a thorough micro-approach that would provide the enablers for the attainment of the macro policies being implemented by government.”

Mr Osei-Amoako further promised to submit a paper on the position of the GNCCI on the economy so local businesses could also compete.

The Vice-President, Dr Mahamudu Bawumia, in his response, underscored the efforts of the government to improve the economy for the greater good of the business community and the country at large.

He also stressed the resolve of the government to develop a holistic and a sustainable approach for a long-term solution towards addressing the challenges confronting the economy.

He was, therefore, happy with the assessment of the economy by the chamber and commended the GNCCI for continuously partnering the government as key private sector players in the economy.

“We do not know what is coming and when it will end, therefore countries that position themselves well with the private sector will be the winners at the end of the day," Dr Bawumia said, and called for more investments in the agriculture sector to produce more food to feed the people.

While emphasising the commitment of the government to improve on food production, the Vice-President indicated that the agriculture sector was the way to ensure there was sufficient food on the continent.

He further assured the GNCCI delegation that the issue of the country’s unattractiveness in terms of investments would also be addressed and said “it is instructive to empower businesses to effectively withstand the shocks emanating from the market, industry, and economy."

Vice-President Bawumia said, “the government has resolved to go into huge food production to resolve food inflation and food security in the country” and mentioned some measures being put in place by government which he said included the recently launched digital platforms as part of the process to improve the business environment as well as making the economy cashless to help provide financial inclusion to all Ghanaians through digital banking.