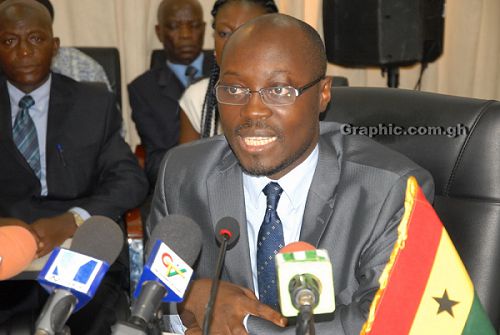 A former Deputy Minister of Finance, Dr Cassiel Ato Forson says he will address the charge of allegedly causing financial loss of €2.37 million to the state today at a press briefing.

The former Minister of state and two others have been charged for allegedly causing financial loss to the state in a deal to purchase some 200 ambulances for the country between 2014 and 2016.

Reacting to the charge in a Facebook post, Dr Forson, who is also the National Democratic Congress (NDC) Member of Parliament (MP) for Ajumako Enyan Esiam, and the Ranking Member on the Finance Committee of Parliament, said he would not be distracted as he stands with Ghanaians to oppose the "repressive policies of this government".

He also urged to remain calm because he will address the charges.

"My attention has been drawn to the widely circulated stories suggesting that the Akufo Addo government has brought criminal charges against me," the statement posted.

"As I prepare to fully address the matter tomorrow at a press briefing I urge all right thinking members of our society to remain calm and note that I shall not be distracted by the machinations of the State just because I stand with the good people of Ghana to oppose repressive policies of this government!".

Dr Forson is in court with Sylvester Anemana, a former Chief Director of the Ministry of Health and Richard Jakpa, a businessman.

Per the A-G’s facts accompanying the charge sheet, in 2009, during the state of the nation’s address, the then President John Evans Atta Mills, indicated that new ambulances would be purchased to expand the services of the National Ambulance Service to many parts of the country.

It said following the state of the nation address, Jakpa, who is a local representative of Big Sea General Trading Limited, a company based on Dubai, approached the Ministry of Health with a proposal that he had arranged for finance from Stanbic Bank for the supply of 200 ambulances to the government.

“By a joint memorandum dated 30th April, 2012, the Minister of Finance, Dr Kwabena Duffuor, and the Minister of Health, Alban S.K Bagbin, applied for parliamentary approval for the supply of 200 ambulances at a price of €15,800,000 to be paid out of credit arrangement between Stanbic Bank and the government of Ghana through the Ministry of Finance.

This memorandum to Parliament did not make reference to any role to be played by either Big Sea General Trading Limited or agents for Big Sea.

Parliament, it said, approved the financing agreement between the government and Stanbic Bank.

According to the facts, Graphic Online's Ebo Hawkson reports that on November 19, 2012, Anemana wrote to the Public Procurement Authority (PPA) seeking approval to engage Big Sea through single sourcing for the supply of 200 ambulances.

“By an agreement dated December 19, 2012, the Ministry of Health, formally contracted Big Sea General Trading, based in Dubai, for the supply of 200 Mercedes Benz ambulances. The contract sum was €15.8million at a unit price of €79,000)

“The terms of the delivery, as per the agreement, were that the first assignment of 25 vehicles should be delivered within 120 days of the execution of the agreement. The outstanding 175 vehicles were to be delivered in batches of 25 every 30 days,” the facts said.

It said per the terms of the agreement, advance payment was prohibited, but rather the payment was to be done through the raising of letters of credit by the government of Ghana to the suppliers of the ambulances.

The facts added that on August 7, 2014, Dr Forson, who was the Deputy Minister of Finance, wrote to the Bank of Ghana for letters of credit of €3,950,000 for the supply of 50 ambulances in favour of Big Sea.

The letters of credit, the facts added were accordingly released to Big Sea.

“A consignment of 10 ambulances which was shipped from Dubai on October 22, 2014, arrived on December 16, 2014. A post-delivery inspection of the first batch of 10 ambulances revealed that some were without any medical equipment in them. Other fundamental defects included defects on the body of the vehicles and the patient compartment of the ambulances.

“The third batch of 10 vehicles were shipped on February 12, 2015. By this time, the second batch had already arrived at the Tema Port. All the 20 ambulances had the same fundamental defects. A total amount of €2,370,000 was paid for the 30 vehicles, the facts added.

It said by a letter dated January 20, 2016, the then Minister of Health, Mr Alex Segbefia, told Big Sea that “the vehicles did not meet ambulances specifications and were not fit for purpose.”