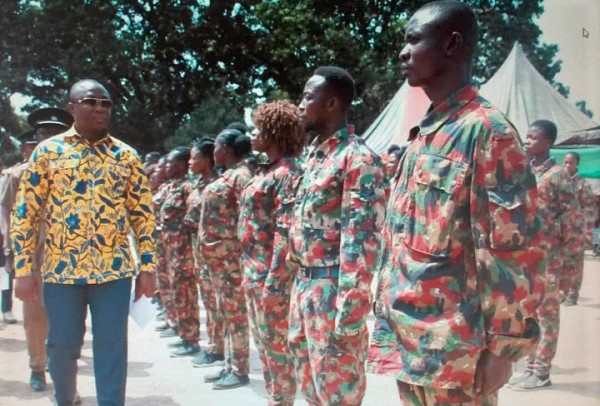 Mr Amoakohene inspecting a guard of honour mounted in his honour by the fire volunteer squad
30.5k Shares

More than 170 farmlands have been destroyed by bushfires in the Bono East Region, posing a threat to the government’s flagship agricultural programmes such as Planting for Food and Jobs (PFJs) and Planting for Export and Rural Development (PERD).

In addition, the bushfires have burnt an unspecified number of houses and beehives belonging to some farmers in the region.

The Bono Regional Commander of the Ghana National Fire Service (GNFS), Divisional Officer Grade I (DOI) Mr George Anim Frimpong, disclosed this at the launch of the regional bushfire prevention campaign and inauguration of fire volunteer squads at Atebubu in the Atebubu-Amanten District.

He said the fire incidents were recorded between December 2019 and February 2020 and called for the re-tooling and resourcing of the various rural fire departments of the service and fire volunteers to reduce fire outbreaks in the region.

The launch brought together hundreds of farmers and fire volunteers drawn from the various farming communities in the region.
It held was on the theme: "My environment, my life: Stop bushfires now."

Mr Frimpong explained that the programme was launched at Atebubu because of the high incidence of bushfires in the area, compared to other districts within the region.

He said the burning of any part of the vegetation, such as farmlands, forests or grasslands, had been identified as one of the greatest threats to the ecological balance of nature and a socio-economic problem stifling economic progress, as investments in food crops and forests were perennially destroyed by fire.

"The cruel, violent, deliberate and unprovoked setting of fires to bushes negatively affect the sustainability of the environment and human life," Mr Frimpong said.

The bushfire prevention campaign, he added, would provide the GNFS the platform to reflect and sensitise the public to the devastating effects of bushfires in the region.

He explained that any person who fell foul of bushfire laws would be liable, on conviction, to a fine or term of imprisonment and appealed to the public to desist from interfering in the administration of justice when one was caught by the law, as it defeated the goal of protecting the environment and human lives.

According to him, the laws were meant to be enforced without fear or favour or undue interference from any person or institutions.

He declared the bushfire situation in the region as an emergency, saying "if we admit that we are in emergency, then we need to devise preventive and control measures to forestall the situation".

The measures, he said, would include education and enforcement of the relevant laws on bushfires.

Mr Frimpong said available records indicated that bushfires were started by humans, both deliberately and accidentally, explaining that they were caused by the activities of herdsmen, group hunters, unattended fires, indiscriminate disposal of cigarette butts, charcoal burners and the practice of slash and burn agricultural method.

For his part, the Bono East Regional Minister, Mr Kofi Amoakohene, said agriculture was now attractive to the youth and remained the largest employer of the country's labour force and called for necessary measures to be put in place to preserve and protect farmlands, forests and the vegetative cover.

Mr Amoakohene said the wanton destruction of the vegetation by bushfires had impacted negatively on the sustainability of the environment and there was the need for stringent measures to stem the tide.

He, therefore, charged the Regional Command of the GNFS to regularly sensitise the public, especially farmers, herdsmen, palm wine rappers and game hunters, to the devastating effects of bushfires in the region and the need for all well-meaning citizens to get involved in preventing bushfires.

He added that bushfire prevention campaigns had, over the years, provided great opportunities for the GNFS to sensitise the public to the devastating impact of bushfires and that concerted efforts were needed to stop bushfires.