Be measured in utterances to consolidate peace — Chief Imam 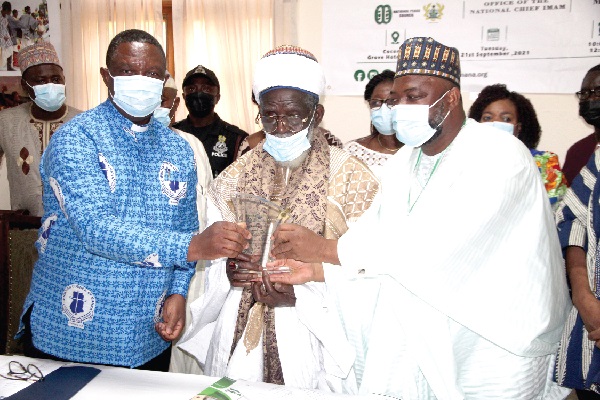 The National Chief Imam, Sheikh Osman Nuhu Sharubutu, has advised the people to always be conscious of and measured in the tone and context of their utterances to consolidate the prevailing peace in the country.

He said peace was one of the greatest favours from God to humanity, hence the need for the people to work towards protecting the gains made so far in the country’s ethnic, cultural and religious diversity.

“We need to value the peace accorded us and recognise one another, even in the context of our diversity,” the Chief Imam added.

Sheikh Sharubutu, who gave the advice at a symposium organised by the Light Foundation, an NGO, to mark this year’s World Peace Day in Accra yesterday, further said God did not create humans to fight among themselves but to understand and tolerate one another, regardless of their ethnic or religious backgrounds.

The symposium was on the theme: “Fortifying intellectual and inter-faith cohesion for national development”.

The Chief Imam was presented with a citation by the organisers for his long-standing commitment to peace in the country.

The Chief Executive Officer of the Institute for Security, Disaster and Emergency Studies, an NGO, Dr Ishmael Norman, said it was time the country conducted internal assessment, analysed and developed strategies to improve on the existing peace.

Making a presentation on the topic: “The essence of human diversity from the Christian Perspective”, the Secretary-General of the Christian Council of Ghana, Dr Cyril Fayose, said the parable of the Good Samaritan was a classic example of how Christians were obliged by the Bible to welcome people from other ethnic groups, despite their background.

He urged the people to continue to extend friendly gestures towards one another as an intrinsic aspect of their lives, adding: “We must welcome the people who are different from us because the heart of God embraces every group; it does not discriminate.”

The Chief Executive Officer of the Light Foundation, Sheikh Ali Abubakar Napari, said his outfit was open to partnership with other organisations to promote peace and justice in the country.

He said with the growing instability on the continent, it had become necessary to collaborate with relevant stakeholders to strengthen the ideals of peace and unity.

According to Sheikh Napari, the organisation had, over the past 16 years, worked in line with sustainable development goal (SDG) 16 by supporting the government’s development effort through peace-building programmes.

For his part, a Muslim scholar, Sheikh Sa’id Muktar Abubakar, said Islam emphasised unity in diversity and urged Muslims to always ensure they lived peacefully with their neighbours in their respective communities and workplaces.

“The scriptures stress that even in a state of war, when your enemy surrenders, you stop the fight and ensure that you move him or her to safety,” he added.