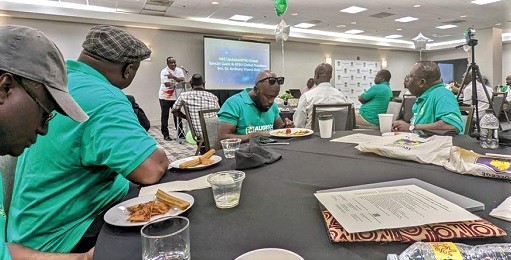 The launch climaxed the first annual meeting since the COVID-19 pandemic struck.

With an initial $108,000 in seed donations from the APSU USA leadership, the proceeds from the fund would be used to support the development of the school.

Launched by Senior Peter Akwaboah of APSU ’86 and Chief Operating Officer of Morgan Stanley, the fund is for a five-year period.

There was also a general fundraising ceremony led by Senior Engineer, Senior Jojo Entsuah of APSU ’75, which raised $225,000 in both pledges and cash.

The current Board of Advisors, Board of Trustees and Executive were officially outdoored in-person at the event graced by seniors from 1972 through to 2013.

In attendance was the APSU Global President, Senior Dr Anthony Ernest Osei of APSU ’80; member of the Board of Trustees, Prof. Charles Appeadu, aka Apisco, of APSU ’77, and Senior Charles Atta Conduah of APSU ’52.

The three-day event lasted between Friday, May 27, 2022, and Sunday, May 29, 2022, featuring familiarisation session, networking, dinner, a talk on “Building a Solid Endowment Fund for St Augustine’s College; Role of APSU Brotherhood”, a boat cruise on Lake Lanier in Buford, Georgia, and a prayer session, among others.

It concluded with some games, a picnic and thanksgiving Mass at the Ghanaian Catholic Community at the St Patrick’s Catholic Church in Norcross, Georgia.

Other activities included the reading of the annual report by the President of APSU USA, Senior Augustine Abotsi of APSU ’93, which consisted of the ratification of the APSU USA Constitution, the formal incorporation of the union as a tax-exempt organisation, and the establishment of their flagship programme, the APSU North Star Series, held monthly over zoom, among others.