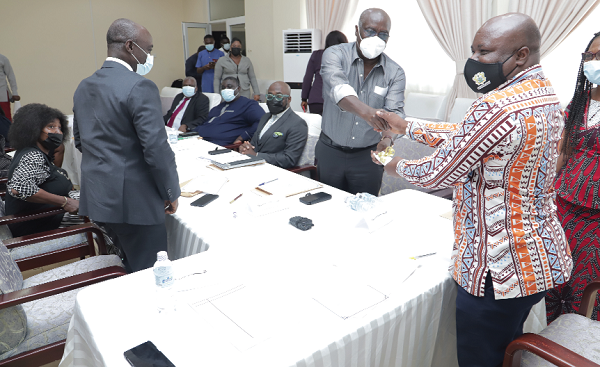 The Minister of Public Enterprises, Mr Joseph Cudjoe, has charged the management of state enterprises to run their entities efficiently to make them profitable and pay dividends to the government.

He said it was only when that was achieved that the full impact of their value creation and contribution to development in the society would be felt by all.

“I note with joy that all of you have the background, skills and experience to serve in your positions with courage, expertise and diligence to meet the expectations of the President,” Mr Cudjoe said.

He gave the charge in Accra yesterday when he swore in a nine-member board of the State Interest and Governance Authority (SIGA).

Chaired by businessman, Mr Terrence Darko, the board also has the Director-General of SIGA, Mr Edward Boateng, Ms Yasmin Baba and Mr Franklin Asafo-Adjaye as members.

Mr Cudjoe stressed the importance of state enterprises, adding that they would continue to remain a relevant feature of government intervention for societal and public value creation.

“This is because state enterprises play very key roles in all sectors of the economy and are an influential force for advancing government policies and programmes,” he said.

The minister stated, for instance, that in the last five years, the ministry had been encouraged that some of the state enterprises increased their staff numbers yet remained profitable.

“Therefore, motivations for creating state enterprises range from a number of reasons, including growth of strategic sectors and boosting the national economy,” Mr Cudjoe added.

He, however, bemoaned the situation where some state enterprises had performed below expectations over the years.

Mr Cudjoe charged state enterprises to leverage technology and innovation to drive development and new thinking in an era of digitalisation.

“Leadership of state enterprises must therefore be strategic, efficient and effective in using technology and innovation to drive profitability by looking at external markets,” he advised.

In a response, the board chairman expressed gratitude to the former Director-General, Mr Asamoah-Boateng, for his energy and hard work.

Mr Darko further expressed confidence in Mr Boateng, saying having joined SIGA with international, public, private sector and diplomatic experience would take the authority to the next level.

“I have no doubt of what can be achieved under your leadership,” he chairman said.

Mr Darko again stressed the need for the authority to make sure that entities followed appropriate corporate governance procedures and complied with relevant laws.

Mr Darko added that SIGA would be a change agent to ensure that the objectives of state entities and the President’s vision of a prosperous, inclusive, sustainable, empowered, and resilient Ghana Beyond Aid agenda, was achieved.