7 Injured in clash between farmers, police at New Abirem 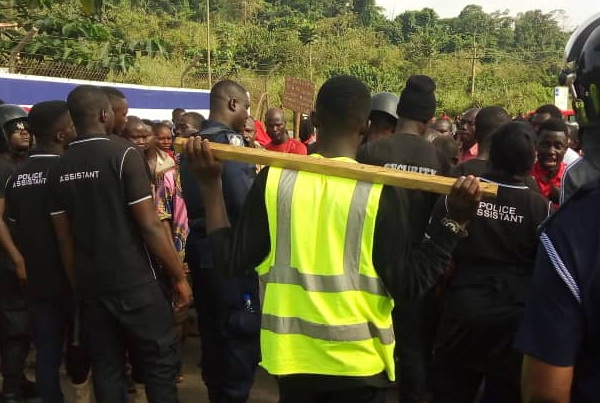 Seven people sustained various degrees of injury when aggrieved farmers who were demonstrating at New Abirem over claims of inadequate compensation by the Newmont Akyem Gold Mining Company clashed with armed policemen on Tuesday.

The injured are responding to treatment at the New Abirem Government Hospital in the Eastern Region.

The police had to use tear gas and rubber bullets to disperse the angry demonstrators, who had blocked the entrance to the mining company to prevent workers from gaining access to the premises.

Some of the protesters are also alleged to have entered the premises of the gold mining company.

The ensuing confrontation between the police and the demonstrators resulted in seven of the latter sustaining rubber bullet wounds.

The Akyem Oda Divisional Police Commander, Assistant Commissioner of Police (ACP) Mr F.S. Adikah, told the Daily Graphic that the farmers claimed that the compensation Newmont paid to them some time ago was inadequate.

According to the agitated farmers, under the New Minerals Act, Newmont should have been paying them annual compensation.

Mr Adikah explained that the company’s refusal to heed to the farmers’ request led to the misunderstanding between the two parties.

The farmers subsequently sued Newmont at the Koforidua High Court, but some opinion leaders in the area impressed upon them to withdraw the case for an amicable settlement.

When the two parties could not arrive at an agreeable solution, the farmers returned to the court, where the case was pending.

Mr Adika, therefore, expressed surprise over the action and the decision by the farmers to block the entrance to Newmont premises yesterday.

He said the police had to mobilise additional personnel from Oda, Akyem Swedru, Akyem Ofoase, New Abirem and elsewhere to control the situation.

When the Daily Graphic contacted the Birim North District Chief Executive (DCE), Mr Remond Damptey, and the Member of Parliament (MP) for Abirem, Mr Osei Frimpong, they advised the farmers to exercise restraint as efforts were being made to involve all stakeholders in the impasse to find a lasting solution to the problem.

At the time of filing this report at 3 p.m., the farmers had not completely called off the demonstration, as pockets of them had gathered at various parts of the town discussing the next line of action.