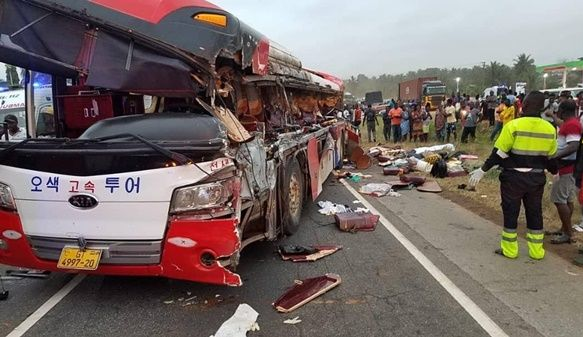 Nine out of 10 of all road crashes in the country are due to human factors, the Sofoline District Police Commander of the Motor Traffic and Transport Department (MTTD), Assistant Superintendent of Police (ASP) Mr Andrews Okyere, has said.

ASP Okyere also stated that 401 people in the Ashanti Region, out of which 393 were males, lost their lives through road traffic accidents (RTAs) within the first 10 months of this year as compared to 236 fatalities recorded for the same period last year.

“During the period under review, a total of 4,593 vehicles as against 3,921 were involved in these road crashes, with 904 of them reported as serious cases,” he indicated.

Speaking at this year’s World Day of Remembrance for Road Crash Victims in Kumasi, ASP Okyere said the statistics on road traffic accidents in the region were a bit scary.

Every third Sunday in November is observed globally as Remembrance Day for Road Crash Victims to remember the many millions who have been killed and seriously injured on the world’s roads and to acknowledge the suffering of all affected victims, families and communities.

ASP Okyere said in spite of the education being carried out by the department and other stakeholders within the road safety management sector, the rate of accidents kept increasing.

He cited fatigue driving, drink driving, speeding and wrongful overtaking as some of the main causes of the RTAs and asked all to get involved in the campaign against the carnage on the road.

He cited an example of a female driver who was speaking on her handset while driving and at the same time trying to pick up the phone which had slipped out her hand. “Within a span of 10 seconds that she tried to pick the phone, she lost control of the steering wheel and ran over a pedestrian, killing her instantly.

“But for the timely intervention of the police, she would have also committed suicide,” he said.

He added that the presence of the police on the road was for a purpose and not just to check car papers.

The Kumasi Metropolitan Director of Health, Dr Akosua Gyimah Omari-Sasu, advised passengers on especially commercial vehicles to speak out whenever drivers engaged in acts that could endanger their lives.

She stated that more often than not, passengers were reluctant to speak up whenever commercial drivers engaged in wrongful acts such as speeding, wrongful overtaking or driving while using mobile phones.

Dr Omari-Sasu said it was high time everyone got involved in the campaign against indiscipline on the road and not to leave it to only the police and other state agencies.

Giving the statistics at the Suntreso Government Hospital, Dr Gertrude Acquah-Hagan, who represented the Medical Superintendent, said last year the facility recorded 333 RTA cases as compared to 250 by mid-November this year.

She said the main challenge was space to admit more patients as the Accident and Emergency Unit of the hospital only has five beds.