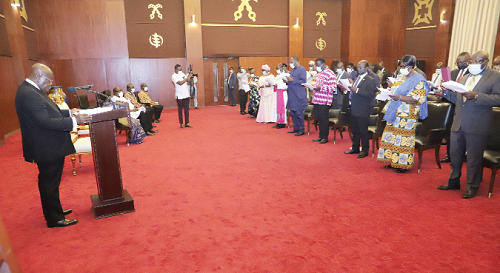 President Akufo-Addo swearing in members of the NDPC at the Jubilee House. Picture: SAMUEL TEI ADANO

President Nana Addo Dankwa Akufo-Addo has bemoaned the country’s tax amounts when compared to the size of the economy.

He said it was a source of concern that Ghana’s tax amounts were smaller than those of its peers in the ECOWAS region and the world over.

Ghana’s tax-to-gross domestic product (GDP) ratio of 14.3 per cent was the least such collection in West Africa, he said, explaining that being the second largest economy in ECOWAS, Ghana should not have one of the lowest tax-to-GDP ratios in the community.

President Akufo-Addo said while the average tax-to-GDP ratio in West Africa stood at 18 per cent, the recommended ratio for ECOWAS member states was a minimum of 20 per cent.

On the other hand, the ratio for Organisation for Economic Co-operation and Development (OECD) countries was 34 per cent of GDP, and it was no surprise that the developed nations of the OECD could readily find the means to fund their own development, particularly their infrastructural development, whereas Ghana was constantly struggling to do so, he said.

The President made the observation when he swore in members of the National Development Planning Commission (NDPC) at the Jubilee House in Accra last Tuesday.

The 49-member commission is chaired by a Development Economist and immediate past Minister of Planning, Professor George Gyan-Baffour, who is also a former Director-General of the NDPC.

The members include 10 Cabinet ministers, the Governor of the Bank of Ghana, the Government Statistician, a representative each from the 16 regions and experts from academia, labour and other professional bodies.

That, he said, would help realise its development potential and thereby create opportunities for vibrant and dynamic youth and improve livelihoods for all Ghanaians.

“The NDPC should have this issue as a special focus of inquiry. It is of extreme significance for the rapid development of our economy,” he said.

President Akufo-Addo expressed optimism that Ghana should be able to leverage the potential of the youth, the acumen and sense of enterprise of its businessmen and women and the knowledge of its renowned scientists and researchers to advance its fortunes.

He said he was aware that the NDPC was leading a process to localise the African Continental Free Trade Area (AfCFTA) with the provision of guidelines and capacity development programmes for district assemblies.

He said he was also following with keen interest the numerous initiatives facilitated by the commission to implement the COVID-19 response programme.

The President said he also expected the commission to synchronise and harmonise the multiple frameworks for national development, namely, Ghana at 100, Ghana Beyond Aid and the Ghana CARES Obaatan Pa programme into the national medium-term development policy framework for 2022 to 2025.

“The relevance of development planning, and for that matter your role, is making proposals that respond to our long-term aspirations and needs, resulting in the necessary structural transformation of our national economy,” he said.

The commission is the foremost constitutional body responsible for advising the President on development planning policy and strategy.

Other areas of its mandate are studying and making strategic analysis of macroeconomic and structural reform options, making proposals for the development of multi-year rolling plans and taking into consideration the resource potential and comparative advantage of the different districts of the country.

It also makes proposals for the protection of the natural and physical environment, with the view to ensuring that the development strategies and programmes are in conformity with sound environmental principles.

The NDPC is also charged with making proposals for ensuring the even development of the districts of Ghana by the effective utilisation of available resources, among others.

Prof. Gyan-Baffour, on behalf of the commissioners, thanked President Akufo-Addo for the confidence reposed in them and assured him that they would work assiduously to help accelerate the development of the country.

He said the commission recognised the important and unique role placed on it by the Constitution, and that they would work hard to deliver a framework that captured the aspirations of the Ghanaian people, taking into consideration both technical and political processes.