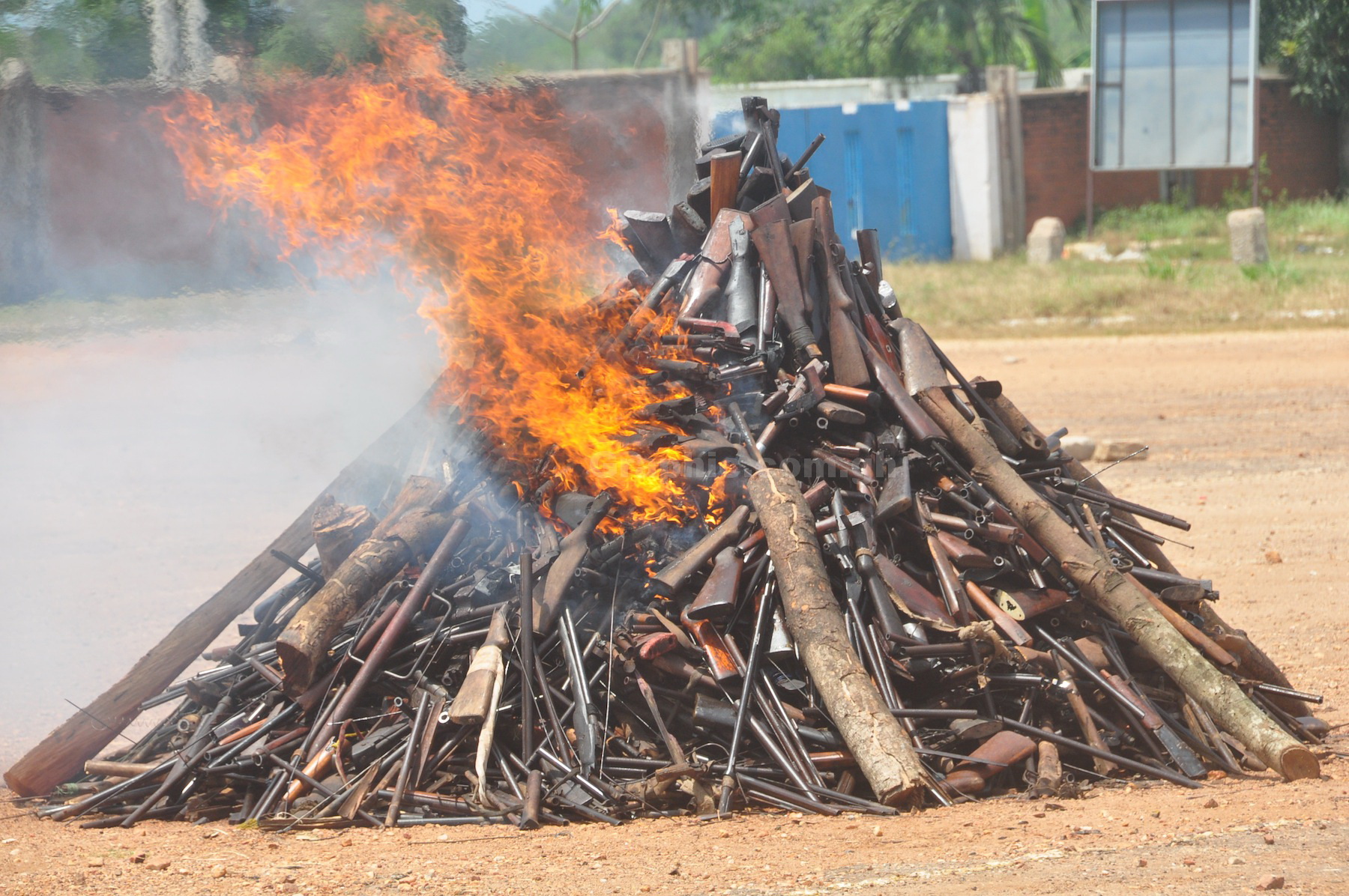 The guns being burnt

The National Small Arms Commission (NSAC) last Saturday destroyed 1,300 illegal guns in the country but warned that there were still more than 1.1 million of such firearms and light weapons that might be in wrong hands.

The guns, which were marked and broken before being set on fire, included locally made single- and double-barrelled shotguns, locally made and imported pistols, pump action guns and local mortars.

The number of illegal firearms in wrong hands means that for Ghana’s 27 million population, the ratio of illegal arms to the population is 1:25.

It is estimated that there are 2.3 million weapons in civilian hands in Ghana, with only 1.2 million of that number having been registered.

The guns were destroyed as part of activities to mark the UN International Day for the destruction of weapons in Accra.

Most of the guns were seized in 2015 by the various security agencies from smugglers and suspected armed robbers and during conflicts and raids on small arms manufacturers.

Speaking at the event, the Minister of the Interior, Mr Prosper Bani, urged all those in possession of unlicensed weapons to take urgent steps to get them registered.

“The law enforcement agencies will ensure that individuals found in possession of unlicensed weapons are arrested and prosecuted,” he warned.

Experts say efforts to enhance public security by collecting and securely disposing of small arms, light weapons and their ammunition have a long history but have gained increased prominence over the past two decades in the context of broader programmes for the disarmament, demobilisation and reintegration of ex-combatants, security sector reforms and armed violence prevention and reduction.

some local arms on display

In that regard, Mr Bani said although Ghana had not experienced any major election conflict since it returned to multi-party democracy, the country could not be complacent, neither could it take its eyes from guns, ahead of the November general election, especially in view of its experience with communal conflicts.

While admitting that the international security situation had become complex because of globalisation, the revolution in technology and terrorism, the government would continue to play its role to prevent the damaging humanitarian consequences of illicit arms.

Key among the government’s efforts to tackle the proliferation of small arms are the tightening of domestic controls in order to prevent small arms from getting into wrong hands; the strengthening of the NSAC; tightening security at national armouries; enhancing weapon marking and tracing; and increasing intelligence gathering to enhance the work of the security agencies.

As the debate over gun control increased across the world, the Executive Secretary of the NSAC, Mr Jones Applerh, said the commission had taken a number of initiatives to combat illicit proliferation of small arms in the country.

He said notable among the initiative was a review of the current laws on arms and ammunition to meet international best practice.

The review, he stated, would require people interested in owning arms to prove that they were of sound mind and had undergone some competency training.

A major headache for the security services is dealing with local arms manufacturers who stay out of the radar of the security agencies, while their products get into the hands of robbers and people in conflict zones.

To deal with the situation, the Executive Director of the West Africa Network for Peace-building, Mr Chukwuemeka B. Eze, suggested that local production of arms needed regulation, while the local producers should be empowered to explore and pursue alternative livelihood sources.

He also made a case for Immigration officials in the sub-region to be well equipped to patrol the borders to address the issues of  small weapons and arms struggle.

The UN Resident Coordinator, Ms Christine Evans-Klock, observed that small arms were not just a threat to global peace but also threatened the achievement of the Sustainable Development Goals (SDGs).

She said the weapons destruction day offered an opportunity for institutions and other stakeholders to educate the public on the dangers of firearms and their threat to peace, security and development.

Apart from uncontrolled local manufacturers and smuggling, there is also growing concern on the international scene concerning guns trickling in from the Libyan conflict.

The Libyan conflict that led to the overthrow and death of President Muammar Gaddafi also resulted in that country’s armoury being looted and thousands of guns being smuggled across West Africa.

The situation has not been helped by the recent Ivorian civil war.

In the last few years, the security agencies in Ghana have arrested a number of arms smugglers. 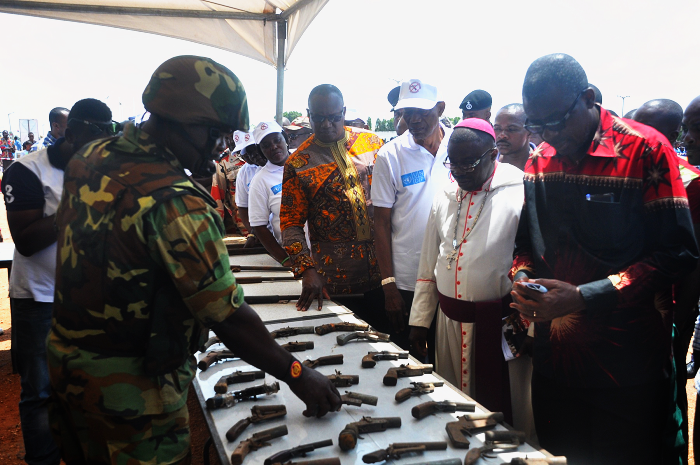 In January, the security agencies intercepted 2,500 rounds of ammunition and a shotgun at Lepusi, a farming community in the Northern Region.

The arms, which were being transported from Accra in a cargo truck, were concealed in between foodstuffs.

The vigilance of some people in the Bimbilla North District in the Northern Region led to the interception of 21 boxes of "Red Star" ammunition cartridges.

It was made up of 5,250 pieces being smuggled into the district, which had experienced some internecine conflicts over the years.

The cartridges were being smuggled from Accra in a Mercedes Benz cargo vehicle, with registration number GT 3126 H.

The Greater Accra Regional Police Command impounded a Nigeria-bound truck loaded with a cache of arms and several boxes of ammunition.

A MAN Diesel truck, with the Nigerian licence plate number XA 761-YAB and branded in Coca-Cola colours, was impounded at Achimota in Accra.

A 72-year-old Ivorian was arrested at Akwatia Line in Kumasi on December 14, 2015 for possessing a large cache of arms and ammunition.

The suspect, Moro Sata, claimed to have received the arms from Cote d’Ivoire, Burkina Faso and Niger.