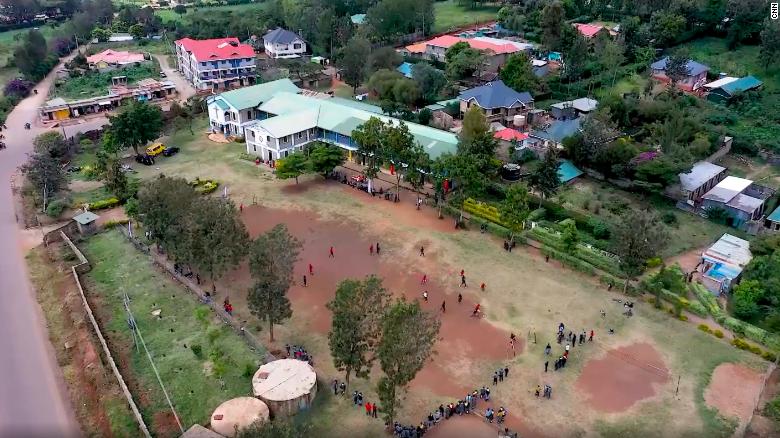 Mutunkei and his team play a football match at a school
30.5k Shares

An 18-year-old Kenyan amateur footballer wants Ronaldo, Messi and Neymar to put down the ball for a moment and pick up a shovel to combat deforestation.

When Lesein Mutunkei scores a goal, he plants 11 trees -- one to represent each player on his team. He's tackling the nation's daily loss of an estimated 50 football pitches worth of forest area.
"Football is a universal game and climate change is a universal problem," Mutunkei said. "It has the power to connect, engage, educate and inspire my generation to create a safer and greener future."
Deforestation refers to the clearing of forests and trees for agriculture, or to harvest resources like timber. It contributes to global warming and damages wildlife habitats. In 2018, Kenya's forest cover stood at just 6%, according to the Kenya Forest Service.
That same year, Mutunkei started Trees4Goals to mobilize young athletes in his region to take up his pledge of planting trees every time they score. Now, he wants FIFA to use its audience of billions to take his impact global.
In a recent email to CNN regarding Mutunkei, a FIFA representative commented, "This and other similar projects led by young people and climate defenders around the world are not only commendable, but also necessary."
Mutunkei said he has sent emails and social media messages to FIFA, and while he hasn't directly received a response yet, some big names in the football world have already acknowledged his efforts. After learning about him in an environmental docu-series, Arsenal Football Club sent him an autographed jersey.

These acknowledgments bring Mutunkei one step closer to his dream world where football teams compare their success by the size of the forests they've planted, not just the number of trophies on their shelves.
Unlike a trophy, Mutunkei explained, a tree grows alongside you.

Finding inspiration in tradition
Mutunkei started his journey as an environmentalist when he was five years old. To commemorate special occasions, his family planted trees. "I was probably the same height as a seedling," he added.
Related: Can ancient eco-engineering help fix our degraded landscapes?
That helped him associate the growth of a tree with celebration. But it was the late Kenyan Nobel Peace Prize winner Wangari Maathai that inspired Mutunkei to turn his family tradition into a movement. Maathai founded the Green Belt Movement in 1977, which has since assisted Kenyan communities in planting over 51 million trees.
Mutunkei remembers that Maathai often told a story about a hummingbird trying to put out a forest fire while all of the other animals fled in fear. For him, its lesson is that "however small you think it may be of a difference, it does make a change."
That's where the idea to combine football and environmentalism originated. He started by planting one sapling for every goal. Now, Trees4Goals has planted over 5,500 indigenous trees in forests, at schools, and around football club training grounds.
Mutunkei starts his Trees4Goals workshops with a lesson on the dangers of deforestation. He leads into a football game, and ends with a tree planting session. "Everybody has a great time getting their hands dirty," he added.
He took his 22 football teammates to plant 700 trees in Nairobi's Karura forest. The team accomplished the task in under an hour, despite most of them having no prior experience. "It was almost a race to plant the trees," Mutunkei said.

Building the movement's momentum
With nationwide reforestation efforts over the last several years, Kenya's forest cover now stands at nearly 9%. Yet rising demands for timber and charcoal to fuel infrastructure and population growth continue to contribute to the unsustainable harvesting of forests. Although the country depends on less biomass energy than neighboring Tanzania and Uganda, fuelwood still makes up around 70% of Kenya's energy needs.
While it might still be waiting for support from FIFA, Trees4Goals has caught the attention of Kenya's Ministry of Environment and Forestry. In exchange for advice about how to engage young people in conservation, Mutunkei said the ministry provided him with saplings, and now collaborates with him regularly to decide where to plant them.