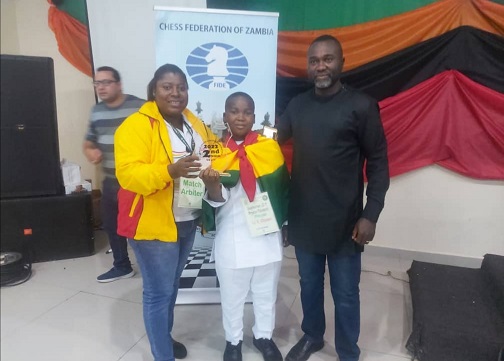 A Class Three pupil of the University of Ghana Basic School, Jeshurun Obiri Yeboah Pryce-Tandoh, defied all odds to win silver in the U-8 category of the just-ended Africa Youth Chess Championships held at the Mika Convention Centre in Lusaka, Zambia.

He defeated 20 opponents in his age category to fly the flag of Ghana very high in far away Lusaka, Zambia.

Aside from the trophy and the silver medal presented to Pryce-Tandoh, he was also awarded a one-year Gold Membership of the Chesskid Online Platform, where he would have a unique opportunity to build his capacity.

He would also attend a 90-minute four-session online group chess lessons, dubbed: ‘online mini-camp’, to be conducted by a notable Grandmaster.

In all, 15 Africa countries, including Egypt, Angola, Botswana, Ethiopia, Kenya and Malawi participated in the championships. The rest are: Mauritania, Namibia, Nigeria, South Africa, Tanzania, Uganda, Zambia and Zimbabwe.

In December last year, Pryce-Tandoh made the nation proud when he obtained the Conditional Candidate Master Title in a similar event held in Kenya after winning the prestigious Gold Medal in the U-7 division of the Africa Schools Individual Chess Championships.

For his prize, he was offered an opportunity to participate in the World Schools Chess Championships in Panama, where he scored five points out of nine to prove his worth as a future prospect.