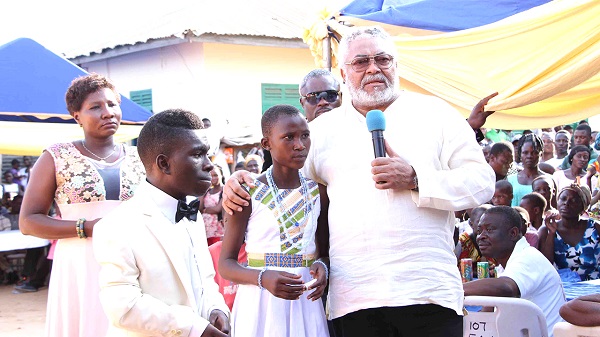 Former President Rawlings with some children at a durbar.
30.5k Shares

The well-organised and attended final funeral rites for former President Rawlings who had been so deep in Ghana’s political history marked the end of a charismatic leader who identified himself with the grassroots, including market women, fishermen and informal workers.

He often joined them to engage in ordinary work such as cleaning gutters.

Former President Rawlings ruled Ghana from 1979 to 2000, first as a military leader and in his last eight years in office as a democratically elected President.

The hundreds of people who thronged the Accra International Conference Centre (AICC) on Monday to file past his remains and attended the state funeral held in his honour testified to this great quality of his. 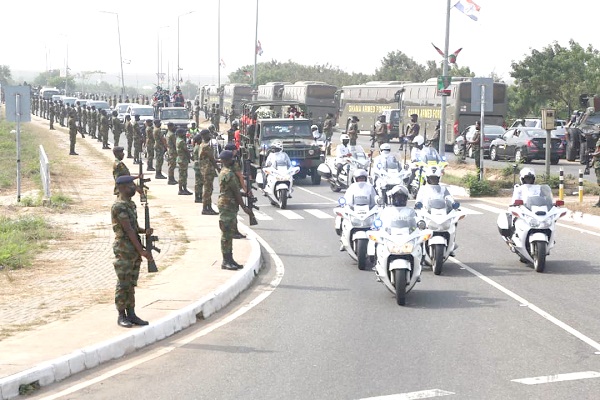 The cortege carrying the remains of former President Rawlings to the Military Cemetery near the Burma Camp.

The four-day state funeral for former President Rawlings began on Sunday, January 24 with a Catholic Requiem Mass at the Holy Spirit Cathedral that was attended by the President Nana Addo Dankwa Akufo-Addo, the Vice President, Alhaji Mahamudu Bawumia; the Speaker of Parliament, the Right Honourable Alban Kingsford Sumana Bagbin, and other state dignitaries.

On Monday, January 25 and Tuesday, January 26, the former President was laid in state for various dignitaries including the President, the Vice President, Speaker of Parliament, former presidents, visiting heads of states and presidents of other countries, Members of Parliament, Justices of the Supreme Court, heads of security agencies, leaders of political parties, among others to view his mortal remains.

The climax of his funeral, observed with full and beautiful military touch, and under the observance of strict health and safety COVID-19 protocols, came off on Wednesday at the Black Star Square.
Dignitaries who attended the funeral included the Sierra Leonean President, Julius Maada Bio; the Liberian President, George Oppong Weah; delegations from the Economic Community of West African States (ECOWAS) and the African Union (AU). Former President Rawlings was later laid to rest at the Military Cemetery near the Burma Camp.

Mr Rawlings was born on June 22, 1947 and was first named Jeremiah Rawlings John. His father was a Scottish Chemist known as James Ramsey John and his mother was Madam Victoria Agbotui from Dzelukope in the Volta Region.

She was buried barely a month before the death of former President Rawlings.

He attended the Achimota School where upon completing his Ordinary Level he enlisted as a Flight Cadet at the Ghana Air Force in August 1967 at the age of 20. He got his rank as Flight Lieutenant in April 1978.

His life as a statesman

Former President Rawlings was a towering figure in Ghana’s politics. In fact, this country’s political history will not be complete without the records of his era.

He burst into Ghana’s political scene like a thunderbolt as a Flight Lieutenant of the Ghana Air Force following a coup against the ruling military government on May 15, 1979.

Former President Jerry John Rawlings, interacting with some children at a durbar at Damongo in the Savanna Region, then Northern Region.

After handing over power to a civilian government, he launched another coup in the country on December 31, 1981 against the Dr Hilla Limann administration.

From this period till 1992, he ruled this nation as a military leader and in his capacity as the Chairman of the Provisional National Defence Council (PNDC).

When Ghanaians started to demand a more democratic form of government in the 1990s, he responded to their demand by forming a National Commission for Democracy. He subsequently resigned from the military as a Flight Lieutenant and participated in the 1992 elections where he emerged as winner.

On January 7, 1993 when he was sworn in, he became the first President of the Fourth Republic.

During the 1996 presidential elections, former President Rawlings contested again and was reelected.

He handed over power to former President John Agyekum Kufuor after his two-term limit of eight years as mandated by the Constitution.

The legacy of former President Rawlings, as someone rightly put it, is like the parable of the six blind men and the elephant.

Everyone has a different perspective to it depending on what they experienced during his era, what they heard and what they saw.

His government was accused by some for human rights abuses including unfair detention, intimidation and murder during his long tenure in office as a military head of state.

However, this write up is not to wade into them but to enumerate some of the achievements during his 21-year rule.

He is credited with the country’s Economic Recovery Programme (ERP), the introduction of the decentralisation system, building of hospitals, schools, roads, as well as strengthening of ties with our neighbouring countries and those beyond.

President Rawlings was married to Nana Konadu Agyeman Rawlings who was very instrumental during his administration.

She founded the 31st December Women’s Movement (DWM), which among others championed the cause of women.

They had four children and as pan africanist as Mr Rawlings was, he named them after notable personalities in Africa.

His first child is called Zanetor, which means the darkness must come to an end. Yaa Asantewaa, the second child, was named after the legendry queen mother of Ejisu, Queen Yaa Asantewaa.

Amina, the third child, is named after the skilful Hausa warrior, Queen Amina of Zazzou (now Zaria in Nigeria) while his son, Kimathi, was named after Dedan Kimathi, the revolutionary of Kenya who led the Mau Mau uprising against British colonial rule in that country.