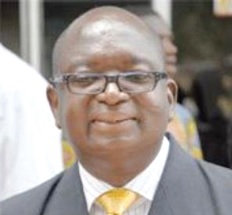 “We Africans recognize that our present conditions leave much to be desired that we accept it as our primary responsibility to turn this around. And in the spirit and letter of democracy and good governance we shall leave no stone unturned and indeed shall not rest until we prevail”.

This was a speech by Dr Francis Appiah, Executive Secretary of the National African Peer Review Mechanism (APRM), when he received the German-African Award, in Berlin, Germany, in 2007.

Dr. Appiah envisaged the APRM as an epitome of change for the African continent and, once he assumed the position in 2004, he dedicated his entire life to pursuing the ideals of the mechanism. In fact, he was on one of his many foreign assignments when he fell sick and passed away subsequently, ten years ago.

In commemoration, it is proper to remember a man whose patriotism and non-toxic nationalism led him to tirelessly pursue the vision for democratic change and good governance.

He believed the only way to unlock Africa’s potential for greatness was for its people to live in a peaceful and prosperous environment.

Before his tertiary level education, Francis had a stint with teaching. It was during this period that he brushed shoulders with self-realisation, unveiling his potential to make a selfless impact on humanity.

He loved teaching and realized he could spread knowledge and make a difference across societies. So entering the university in 1977, he read Political Science, Philosophy and History and graduated in 1980.

He then served his nation with the Ghana Tourist Board as a national service personnel, after which he travelled to Nigeria to take up a teaching appointment for a year.

He needed money to support his ambition for higher education and Nigeria which was awash with oil offered the opportunity.

In 1982 Francis gained admission with scholarship to the Institute of Administration and Organisational Science at the University of Bergen, Norway, for graduate work. He was awarded a Master’s degree “Candidatus Politicus” with distinction in 1987.

His exceptional performance secured him a Teaching Assistantship at his Institute. With utmost admiration by his professors, he was encouraged to pursue a doctoral degree which he did and successfully defended his “Doctor Philos” thesis in 1996.

With this feat, he became the first overseas student to obtain a doctorate degree at the Institute. Whilst in Norway, Francis served as leader of the Ghanaian Community in Bergen, General Secretary of the African Students Union, amongst other positions.

Though he was offered various jobs abroad, Francis opted to return home to contribute to building a better Ghana.

He took up an appointment as a lecturer at the School of Administration, now University of Ghana Business School, where he became the Head of the Public Administration Department.

Loved by students and colleagues, he engaged actively in advancing the wellbeing of the school and university at large.

In 2004 Francis was appointed the first Executive Secretary of the national APRM. At this point in his career, he could pursue his quest for Africa’s transformational development.

Through his initiatives and action plans, Ghana was the first country on the continent to be peer-reviewed when President John Agyekum Kufuor faced his peers at the AU Summit in Sudan in January 2006. Francis travelled the length and breadth of the country and continent sharing Ghana’s example of the APRM implementation and preaching the gospel of good governance and economic development. His enthusiasm for a positive African future was highly admired by many African leaders, including heads of international development organisations.

He received countless commendations and awards both home and abroad for his commitment to duty. In 2007, the German Chancellor, Dr Angela Merkel presented Dr Francis Appiah with the German-Africa Prize in Berlin for his outstanding achievements on the concept and implementation of the APRM process in Ghana as well as countries that had acceded to it.

In 2008, Dr Appiah was decorated by President Kufuor and awarded the “Star of Volta,” the second highest civilian award in the country. This was in recognition to his contribution to the advancement of good governance in Ghana and Africa.

His dedication and commitment to Ghana and Africa’s progress was so deeply rooted in his DNA that, although his health was failing during his last days, he continued to go to work just so that he could respond to messages and ensure deadlines were met.

On the April 22, 2010, Dr Francis Appiah took his last breath as he ferried to the afterlife. To memorise his legacy, his family had a library established in his name at the University of Ghana Business School.

The library is filled with books he personally acquired throughout his life’s journey. On the tenth anniversary of his passing away, we must remember his love and zeal to make our society better and also realize how life could be cut short before reaching our full bloom.

He reminds us to work assiduously towards achieving our goals and contribute to the transformation of our country and the continent while experiencing life in its fullest.

The writer is an MBA Student, University of Ghana Business School