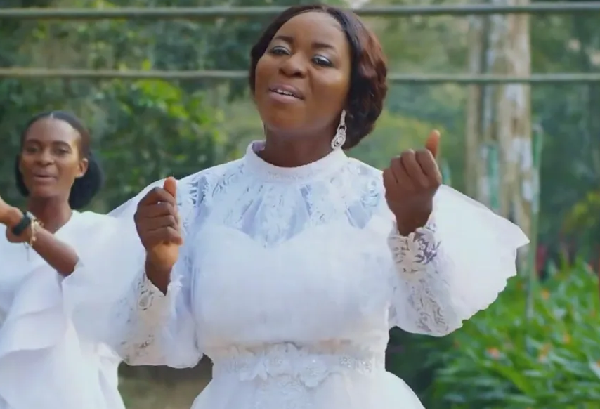 When I last wrote about the power of gospel music, I noted that many gospel musicians obtained the lyrics of their songs through personal experience—especially through trials and hardship.

For example, Cecilia Marfo sings, “The day I was in distress, I bent my knees before my God, and I cried unto him to come to my aid—and he did; my prayers were not in vain, neither was my fasting.”

Award-winning gospel artiste Diana Hamilton, who stresses that she is a “work in progress” — because God is still working on her— also testifies that the test she endured has become her testimony. For others, their mess became their message.

You only need to read the Psalms, which are poetic songs, to come to grips with the reality that life’s challenges give birth to godly music.

A current instance is the story of gospel musician Lady Ophelia, whose songs are jam-packed with gratitude to God for his favour.

A young woman selling sachet water on a busy street runs dangerously alongside speeding vehicles to serve a customer who needs water for her child.

In her haste, the hawker slips on a plastic bottle and falls painfully on the tarmac, pouring out her water sachets.
Still on the ground, the hawker retrieves the only sachet left, wipes it on her dirty dress and hands it over to the customer.

Instead of being grateful, the customer seizes the sachet and smashes it on the hawker’s head, splashing water over her face and into her dress.

Having lost her wares and receiving no payment, the hawker rises with her empty container, looks around mournfully and walks away with tears in her eyes.

In the video, the hawker is seen leaning against a dilapidated building in a deplorable suburb, looking sad and dejected.

That episode in the music video, says gospel artiste Lady Ophelia, is only a small reality of her life. Other experiences include hard times of scarcity and frustrations.

To make ends meet while growing up at Kwahu and in Accra, she did odd jobs, including street hawking and living on the barest necessities of life.

This, essentially, is the story of Ms Ophelia Akua Dedaa, known in gospel music circles as Lady Ophelia, whose M’aseda Nnwom (my song of gratitude) premiered on March 1 this year on all digital music platforms.

According to Ophelia, her calling into gospel music dates back to basic and secondary school days when she sang at school functions as a soloist.

While attending Abuakwa State (Teacher Training) College and afterwards, she continued to sing in churches and at Christian functions, as well as preach in buses.

All this time, Ophelia, who is the songwriter and composer of her songs, had the vision to produce her music for wider distribution.

But between vision and its fulfilment lies a yawning gap full of pitfalls and endless waiting. For 10 years she kept hope alive, waiting, praying and longing for help to show up!

“It was a test of faith and endurance while waiting for God’s best time,” says Ophelia. “Waiting without knowing what lay ahead was slippery and full of temptations.”

Elaborating, she reveals, “I rejected juicy offers that would have meant compromising my Christian stand and ruining the message in my gospel songs.”

After a decade, however, her vision was fulfilled. The anticipated help arrived when, following a musical performance at the Kaneshie Presbyterian Church in Accra, God touched the heart of someone who, without even knowing her, assisted to produce her debut album: Ayeyie Awie (It is already well) in 2018.

Apparently, Ophelia realised, it was one thing producing a song and quite another thing promoting it. After her first album launch, she embarked on the difficult journey of promoting it.

“And it hasn’t been easy at all!” she admits.

Not giving up, Ophelia dropped her single, M’aseda Nnwom, on March 1 via social media platforms. It is the lead song in her second album which she is preparing to launch.

A blogger describes the song as “fun-uplifting soulful praise and worship melody that draws you into the presence of God with gratitude”.
High-ranking sound engineer for all her songs, Shadrack Lawson (Shaa), adds value to her music.

Ophelia said with tears in her eyes, “This is my song of gratitude to God for bringing me out of a deep tunnel towards fulfilling my music ministry.”
Having now signed on to the management of the prestigious Media Excel Productions, Lady Ophelia looks forward to a more professional marketing and promotion of her music—with gratitude to God.