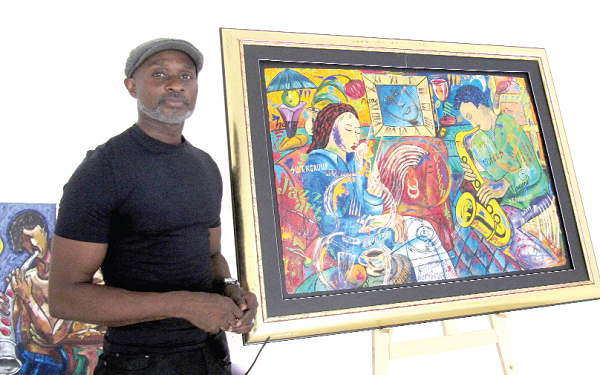 Safori standing by one of his Jazz-themed paintings
30.5k Shares

Ghanaian artist, Yaw Ofosu Safori, is one of the folks who always welcome April with some glee in their hearts because it is Jazz Appreciation Month and there is global attention on the music’s role of uniting people in all corners of the globe.

April 30, is also the day the United Nations Educational, Scientific and Cultural Organisation (UNESCO), has officially designated as International Jazz Day to highlight the empowering history and legacy of jazz music.

Yaw Safori is an intense lover of jazz and has created lots of paintings that depict his special attachment to that genre of music.

According to Safori, one of the reasons for depicting so much jazz in his art was to add to what people needed to feel and know about jazz, to entice them to patronise the music.

There is often a certain high degree of concentration on the part of the artist as outlines of pianos, guitars, saxophones, trumpets and microphones gradually evolve into distinctive objects on his canvas.

It begins to feel like eternal jazz classics such as ‘Take Five,’ ‘Mister Magic,’ ‘Take the A Train,’ ‘Milestones’ or ‘Street Life’ would pop out of the different strands of colour and whisk the observer away on cascades of sound.

“It is my contribution to the jazz world and I try to look at things from a broad perspective because jazz is for everybody,” says the man who hails from Akropong in the Eastern Region and has a big collection of jazz albums and magazines. 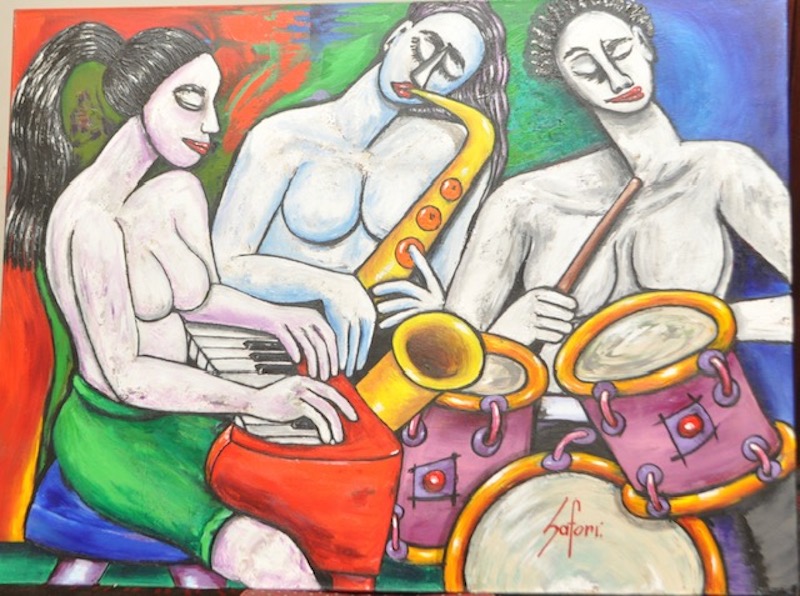 He became aware of American jazz acts such as Crusaders, Randy Crawford, Joe Sample and Grover Washington during his school days at Okuapeman Secondary School and Accra Academy.
By the time he left Ghana for the United Kingdom, en route to the United States in 1989, he knew he was up to something exciting on the new horizons opening up in his life.

He took up art in the United States where he lived for over two decades before coming back home to settle. By some coincidence, the headquarters of the well-known Jazz Times magazine was very close to where he lived in Silver Spring, Washington DC.

He struck acquaintance with some of the writers on the magazine and that was how he came to be featured on a number of occasions in the Jazz Times’ pages for his unique approach to painting jazz. 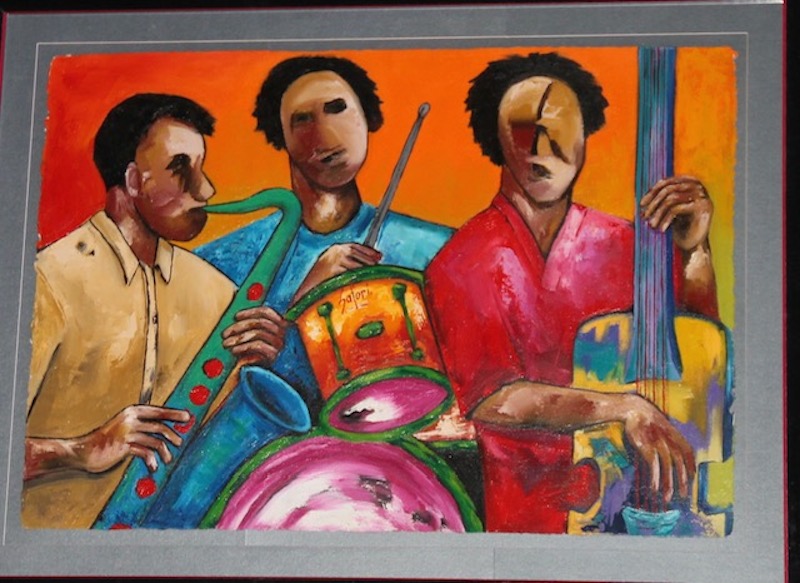 Through the Silver Spring Jazz Festival in Washington DC and Capital Jazz Fest in Maryland where Safori took booths to showcase his work, he met several prominent jazz personalities and that further boosted his passion for that genre of music.

Art was initially only a hobby for Safori. A customer in a San Francisco shop he worked saw something he had produced and mentioned it to the store manager. All the paintings sold out when he was allowed by his superior to show his art work in the shop.

He resigned from his job in the shop and took up art full time after that. He prides himself in developing invaluable relationships with clients who bought multiple pieces at a time. He has since been commissioned by dignitaries and major corporate institutions to produce some of his distinctive work for them.

“I listen to all kinds of music but jazz is my favourite. An artist’s output tends to reflect what is on his mind a lot of the time. Music reverberates in a great deal of my stuff because it never leaves my mind,” says the self-taught artist.

So his canvases are inhabited by solo instrumentalists and singers as well as duos, trios, quartets, quintets, sextets and big bands. His musicians are both men and women in a variety of postures, all caught up in the ecstasy of making music.

The thrill of Safori’s life as an artist derives a lot also from his inimitable way of presenting players and their instruments. Some of his saxophones look like ‘mmenson’ horns and there are bare-breasted, long-necked and red-lipped women blissfully playing away.

“I strongly believe in individuality. What I bring to art is different from what people are used to. Perhaps if I had studied formally in a college or under somebody, I would have been doing things the way my professors or instructors did theirs,” Safori says.

He continues to work in a variety of media, including acrylic, pastel, charcoal and water colour, from his studio at Oyarifa in the Ga East Municipal District. He also works on several themes not related to jazz, but he knows music will always be a big influence in the general direction of his art.

He has incorporated live jazz playing and wine tasting into some of his exhibitions over the last few years and believes those elements also help to strengthen rapport with art lovers.