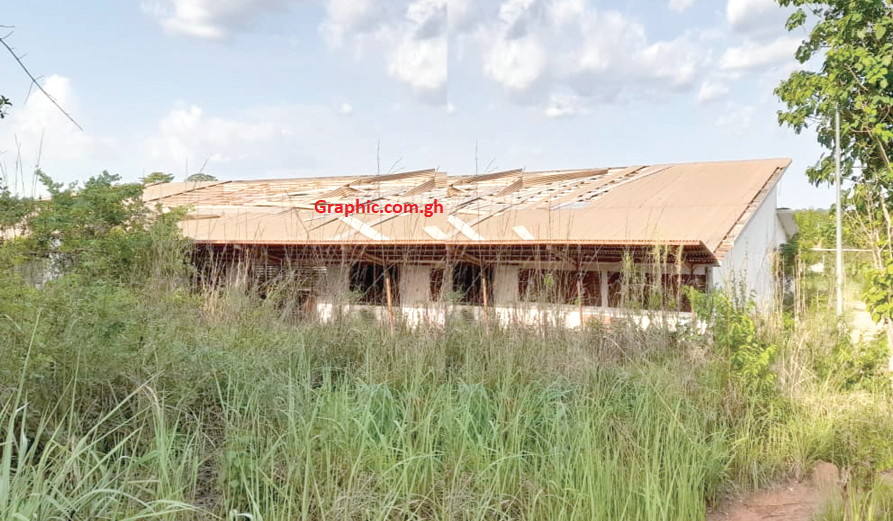 A building at the factory surrounded by weeds
30.5k Shares

Wenchi TOMACAN, a household name in the Bono Region and beyond, was noted for the processing and packaging of vegetables, particularly tomatoes, garden-eggs and okra, as well as all kinds of fruits.

The then buoyant factory became the life-blood of the local economy of Wenchi and its environs in the 1960s, 1970s and early 1980s.

The company itself was called GIHOC Cannery Limited, with the Wenchi Tomacan as its brand name because of its main focus on the canning of tomatoes.

At its peak, the factory directly employed more than 1,000 people while a lot more benefitted indirectly from its operation through the out-grower scheme.

Added to this was the establishment of the Wenchi Tomacan Football Club, which once participated in the country’s elite football division and trained some celebrated footballers in the country, including former Black Stars captain and coach, Mr James Kwasi Appiah.

But today, the company, which has gone through a chequered history after its diversification in 1987, is a pale shadow of its former glory as its new owners have shut down the processing plant since it is not able to get the minimum raw materials for its operations.

In the midst of this, about 500 acres of the company’s land have been encroached upon by residents for the cultivation of cashew and the construction of private buildings.

The GIHOC Cannery Limited was established in the mid-1960s at about eight kilometres on the Wenchi-Ofuman road.

Besides the canning of vegetables and fruits, the company was also known for the production of the popular alcoholic beverage, Bramsco. It also had generators which supplied electricity to Wenchi and its adjourning communities.

During the long vacation, students from the locality were temporarily employed to expose them to real life situation in the early part of their lives.

But the drive towards privatisation in the 1970s slowed down the operation of the company and deepened during the Provisional National Defence Council (PNDC) era during the economic recovery programmes championed by the World Bank (WB) and the International Monetary Fund (IMF).

Amidst these economic reforms, the Wenchi Tomacan plant was finally shut down in 1987.

“I keep on asking myself why the plant was shut down because its products had demand in those days. Even today we cannot produce enough tomatoes to feed ourselves as a country. The company should have grown to become a big industry today,” Mr Kwabena Adu-Gyamfi, told the Daily Graphic.

He is the Managing Director of Agri Commercial Services, an associate company of the now dormant Afrique Link Limited, which is the current owner of the enterprise.

Agri Commercial Services has only nine full-time employees and rely on the services of 26 contract labourers for its operations.

The Economic Recovery Programme, which was characterised with the devaluation of the Cedi and the imposition of IMF/WB conditionalities during the PNDC, era resulted in the divestiture of more state enterprises deemed to be a burden on the national budget.

Mr Adu-Gyamfi told the Daily Graphic that between 1987, when the plant was shut down and 1997 when it was divested, about 500 acres of its land was encroached on while a lot of its machinery, including cars, were stolen by former employers.

Afrique Link Limited, according to him, concluded a purchase agreement with the government through a debt equity swap and focused on tomatoes and was, with assistance from GTZ, the German Technical Cooperation Agency, determined to find a suitable brand for the company’s operation.

Drums used to store some of the processing items

Later in the year 2000, there was a collaboration among Afrique Link, GTZ, Unilever and the Ministry of Food and Agriculture (MOFA) to help farmers in the area with good agronomic practices in the production of tomatoes to feed the factory.

For a period of four years, 500 tomato farmers in 19 communities from the erstwhile Brong Ahafo and Ashanti regions were trained and assisted to form cooperatives while Afrique Link found money to refurbish the factory.

With experience acquired from training by Unilever in food processing and quality standards among others, Afrique Link began the production of various canned tomato products such as tomato pulp and chopped tomatoes.

In 2007, some of the outgrowers decided not to respect their agreements with the company and began to sell their produce to tomato traders who offered them higher prices on the open market, which prevented the company from getting the right quantity of raw materials for its operation.

As if that was not enough, Unilever, which was selling the products of the company and started to encounter problems as a result of the influx of similar but inferior, sub-standard and cheap products on the Ghanaian market, backed out of its contract with Afrique Link Limited.

Since 2010, Afrique Link Limited has stopped processing but Agri Commercial Services Limited is currently farming only on 30 acres out of the remaining 400-acre land of the enterprise for an all-year-round production of raw tomatoes for sale on the open market.

“Afrique Link has stopped processing now because we are not getting the minimum quantity of raw tomatoes to drive profitable operation from our own farm,” Mr Adu-Gyamfi explained.

“Agriculture is not attractive unless you add processing,” Mr Adu-Gyamfi stated, explaining that “It is difficult to acquire funding from the financial institutions in our current state.”

Tomatoes planted in a greenhouse facility

“Our machines are lying idle even though they can work and we continue to use our little resources to maintain them from time to time with the hope that we will be able to start processing in future,” he summed up the predicament of the company.

A visit to the company showed that the entire compound is weedy while the buildings are in a serious state of deterioration with pieces of machinery scattered around.

Mr Adu-Gyamfi said the company had resolved to find funding and shop for skilled labour to revive its fortunes, explaining that together with some research institutions, six high-yielding varieties were being developed to improve on on-farm productivity.

That, according to him, would enable the company to have enough raw tomatoes to start processing in future.

Asked about his motivation to continue working towards the revival of the company, Mr Adu-Gyamfi said “I am motivated because what motivated those who started this company in the 1960s is still relevant today.”

“Today Ghana imports both fresh, sachet and canned tomatoes in addition to other processed vegetables and fruits and this is what the company stands for. We need to fight on and not chicken out in the face of these challenges,” he declared.

Some residents told the Daily Graphic about their fond memories of the company and called on the government to partner the current owners to provide employment for the youth in the area.