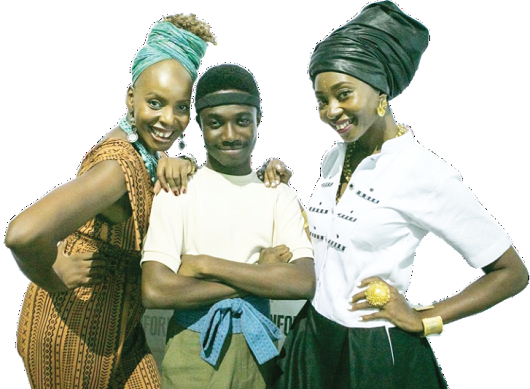 Difficulty  in raising funds to start a business is a worldwide phenomenon and Papa Oppong, a young Ghanaian fashion  designer has told of the challenges he encountered before getting noticed on the local and international fashion fronts.

The 24-year-old graduate of Radford University College in Accra said he had to make many sacrifices, including starving himself, to save his pocket money for his initial collections.

Speaking  at the third Fashion Forum Ghana (FFG) panel discussion last week at the British Council Auditorium  in Accra, Papa said he was able to save  GH¢200 after months of deprivation for his first collections made from old car tires and leather bought from Katamanto in Accra.

The young man who just returned from the United States after showcasing his work at the Smithsonian Institute in Washington, advised  starters in the industry  to learn to save money,  no matter how little they earned.

“Convince whoever steps up to help you that you mean business. Be confident and disciplined. Read and understand contracts before appending your signature,” he said.

Topic for the discussion was: ‘Is Fashion a Risky Business for Ghanaian Banks to invest In?” A fairly large audience of mostly professionals and beginners in the fashion industry was on hand for the event.

Mrs Ampah, who has worked in the fashion industry for the past 20 years, said the business comprised different  segments and one had to focus on which area to operate in.

She  advised starters to know what their customers wanted, ask questions about the financial challenges involved and get every necessary information before plunging into the business.

Speaking from the perspective of banks, Madam Nkrumah said due to the fast-changing nature of the  fashion business, some banks found it too risky to invest there. She, however, urged starters to fall on the banks for general financial advice and not only for loans.

Mr Kusi touched on his outfit’s contribution to the Ghanaian fashion industry and said their duty was to search for markets and make information available to those engaged  in mass production and export.

He asked exporters to often seek help from relevant consultants.

It was not just a lot of talk at the session as Cleavers House Restaurant  treated everyone around to  a delightful cocktail before and after the discussions moderated by Ms Esther Armah, Director of EA Media Productions.

Ms Makeba Boateng, CEO of FFG,  said  the next panel discussion  will be held  on  December 1 at a venue to be announced later.