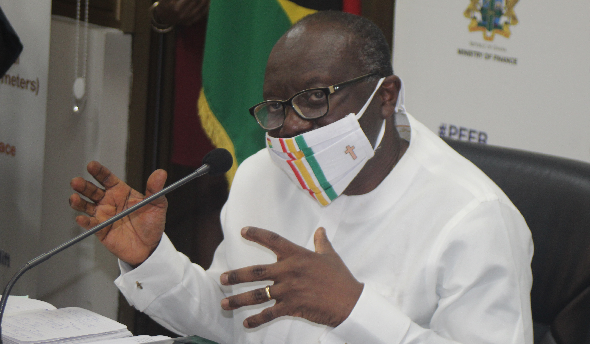 Part of proceeds to be realised from the Agyapa Royalties Investment Ltd deal will be used to fund the GH¢100-billion Ghana CARES Obaatanpa programme to accelerate the recovery of the country’s economy from the ravaging impact of the coronavirus disease (COVID-19) pandemic.

Yields from Agyapa would also be used for the establishment of a National Development Bank, which would be the financial backbone of the Ghana Exim Bank (GEXIM), the Venture Capital Trust Fund, among others, to support the private and the agricultural sectors.

The Minister of Finance, Mr Ken Ofori-Atta, said this when he appeared on News File, a current affairs programme on Joy FM in Accra last Saturday.

The CARES initiative was announced by Mr Ofori-Atta in the 2020 Mid-Year Budget Review, saying it would help mitigate the economic challenges brought about by the COVID-19 pandemic.

He said it would run in two phases — a stabilisation part that began from July 2020 to the end of the year and a medium-term revitalisation phase which was expected to accelerate the Ghana Beyond Aid transformation agenda.

Mr Ofori-Atta said for decades, Ghana had not been able to add value to its gold, a practice which he said would have to stop.

As a result, he explained, part of the revenue to be generated from Agyapa would be used to build a strong value chain in the gold sub-sector, where world-class refineries would be built, with the capacity to authenticate the value of gold (assay) and also certify the precious metal to boost the value the country derived from exporting the commodity.

He said part of the proceeds would also be used to develop and improve the tourism sector, especially around places where gold was mined, such as Tarkwa and Obuasi, to enable the inhabitants to realise the full benefits of the resource on their land.

The minister said President Nana Addo Dankwa Akufo-Addo’s vision to have 111 modern hospitals in 88 districts in the country would also come on stream.

“All these and more tell you that we are not doing anything for the sake of it but we are doing what will help the country and the realisation of the President’s vision.

“We have got to a stage in our national development where we have to move away from using debt to build our economy to using equity, where we can maximise our own resources to achieve more,” he said.

“The processes to complete the deal will not stop because we know we are doing what is right for the country,” he added.

Mr Ofori-Atta said the government had nothing to hide as far as the deal was concerned and expressed its willingness to meet with as many groups as possible to explain, in full, what the whole exercise was about.

On the $500 million expected from the 49 per cent shares to be floated on the London Stock Exchange (LSE) as part of the deal, he debunked the notion that the amount was too small.

According to him, knowing how the stock market worked, one needed an entry point, but that did not mean the end of the road.

He said the amount as peddled around could be the value of 20 per cent or 25 per cent, but that could only be fully known when the Initial Public Offer (IPO) was done.

“We know how the markets work and behave at whatever point in time. We are going in as planned and we are more than convinced that we will achieve what we intend for the good people of Ghana,” Mr Ofori-Atta added.