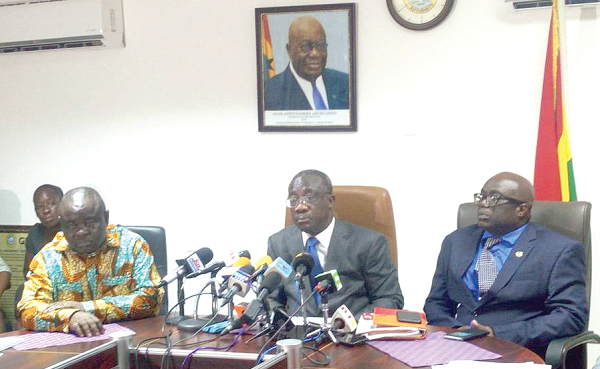 Companies and individuals who fail to take advantage of the tax amnesty programme by the Ghana Revenue Authority (GRA) will face the law in tax suits against them at the end of the expiration date.

The Commissioner General of the GRA, Mr Emmanuel Kofi Nti, said per the tax Amnesty Act, 2017 (Act 955), which was passed by Parliament in December 2017, non-tax payers and tax defaulters who take advantage of the programme would have any prosecution or penalties against them waived, if they declared their taxes by the end of September 2018.

The Act offers limited time opportunity for taxpayers and potential taxpayers who have defaulted in meeting the requirement for tax compliance including non-registration with the GRA, not filing tax returns by due dates, not paying taxes on due dates and not making full disclosure of financial reports.

Per the act, taxpayers and potential taxpayers who have not done the above between the period of 2014 to 2017 must submit an application for amnesty to the Commissioner General by completing a form which can be obtained from the GRA offices or downloaded from the Authority’s website.

Speaking in Accra on the tax amnesty programme, Mr Nti said “this is the last time the government is offering a tax amnesty for defaulting businesses and persons. All those who have defaulted in the submission of their tax returns and payments or who have not previously registered with the GRA must come clean and regularise their tax affairs.”

He said “we have made it flexible by mitigating the punishment. If you do not take advantage, the sanctions will be heavy.”

Mr Nti said although the GRA had the capacity to identify all potential taxpayers, he was silent on the total number of persons and businesses who might be caught in the net saying, “we will vigorously pursue all tax defaulters including prosecuting them after the expiration of the amnesty period on September 30, 2018.”

The tax amnesty programme, he pointed out, was aimed at facilitating the regularisation of the tax affairs of persons who had defaulted in meeting their tax obligations, updating the GRA database, improve tax compliance culture and broaden the tax base.

Taxpayers already registered with the GRA, he said, are expected to voluntarily submit their outstanding tax returns and pay the relevant taxes on all previously under declared taxes without being made to pay the penalties and interest that otherwise would have been imposed for such default under the provisions of the revenue Administration Act, 2016 (Act (915) and other tax laws administered by the GRA.

Also potential taxpayers, who are not registered with the GRA but earned profits or other incomes in the years under the act, have the opportunity to register with the authority and submit all outstanding tax returns for the relevant periods without payment of the relevant tax, penalties and interest that would otherwise have been due on those incomes.

He expressed the hope that the GRA would raise between GH¢300 million and Gh¢500 million for the government from the tax amnesty programme.

This year, the GRA has a tax revenue target of GH¢39.8 billion and, according to Mr Nti, there are discussions to increase the amount by Gh¢1 billion.

In 2017, the authority failed to meet its target as it raked in GH¢ 32.3 billion and registered a shortfall of GH¢1.1 billion.

This is not the first time Ghana is granting tax amnesty to tax defaulters, since in October 2012, Parliament passed the Internal Revenue (Tax Amnesty) Bill, 2011, granting a reprieve to tax defaulters, and seeking to widen the income tax net to improve Ghana’s revenue inflows.

However, Mr Nti said the previous tax amnesty programme was not encouraging, “because of the nature of its presentation”.

“People were not encouraged to come forward. This time we are encouraging people to comply and save themselves from criminal suits,” he said.

Tax reprieves, the world over, give a significant number of liable taxpayers a break to start afresh in fulfilling their tax obligations which result in the widening of the tax net to generate more revenue for the country.

To benefit from the tax amnesty, the GRA has indicated that a person or business that has registered with the GRA previously but has not submitted all previous returns or made full disclosure of all liabilities in previous years of assessment is required to submit all outstanding returns or amended returns with full details of under-disclosed liabilities within the ‘qualifying period’.

They are also to pay all taxes assessed and any taxes due or outstanding under the provisions of all tax laws.

The tax amnesty does not apply to a person or business that had been notified by the Commissioner General of the GRA of an assessment or additional assessment in respect of the tax or any matter relating to tax.

Additionally, a business or person, under audit or investigations in respect of an undisclosed income or undergoing an enforcement action relating to failure to submit returns or payment of any tax assessment, does not qualify for tax amnesty.

The exempted group also include any business or person who has failed to comply with the provisions of any tax laws administered by the Commissioner General of the GRA relating to submission of returns or the payment of taxes that will be due from January 1, 2018.