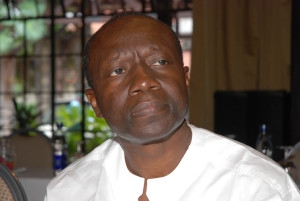 Rating agency, Moody's, is forecasting that the ratio of public debt-to-gross domestic product (GDP) will peak at 73.2 per cent this year, after ending March at 62.5 per cent of GDP.

The agency, which expects the debt profile to decline from the beginning of 2018, said the country’s debt affordability was very low due largely to high domestic borrowing costs.

It said the large share of foreign debt at non-concessional terms exposed the country's debt dynamics to foreign exchange shocks and to a tightening of external liquidity conditions.

The rating agency in a report issued over the weekend said real GDP growth would accelerate to 6.1 per cent this year from the 3.5 per cent it recorded in 2016.

The growth, which is expected to peak to 7.5 per cent in 2018, stems from the increased oil and natural gas production rather than the non-oil sector, which is projected to remain relatively more subdued at 4.5 per cent to five per cent over the forecast horizon.

The country has been held back by fiscal consolidation pressures with subdued real credit growth to the private sector.

It said Ghana's B3 credit rating and stable outlook reflected its strong economic growth outlook and reduction in external imbalances, set against challenges which include a significant fiscal overrun in 2016, high government debt and very low debt affordability.

"Ghana's credit strengths include the strong growth outlook for the country's diversified economy compared to the regional average over the next few years, supported by new oil and gas field developments coming on stream," said Elisa Parisi-Capone, Moody's Vice-President -- Senior Analyst and co-author of the report.

"Its challenges include a debt ratio exceeding 70 per cent of GDP and very low debt affordability metrics over the next two years."

Since 2012, Ghana's debt has increased by nearly 25 percentage points of GDP, primarily because of fiscal overruns and currency dynamics.

But Moody’s says the banking system in Ghana remains liquid and well-capitalised, with a capital adequacy ratio of 17.4 per cent as of April 2017.

An adverse ruling in September 2017 on its dispute with Côte d'Ivoire over the ownership of the Tweneboa, Enyenra, Ntomme (TEN) oil fields would also be negative.

Upward pressure on the sovereign rating would stem from a significant reduction in fiscal and external imbalances supported by the structural reform agenda agreed with the IMF.

Fitch's credit rating for Ghana was last reported at B with stable outlook. In general, a credit rating is used by sovereign wealth funds, pension funds and other investors to gauge the credit worthiness of Ghana thus having a big impact on the country's borrowing costs.