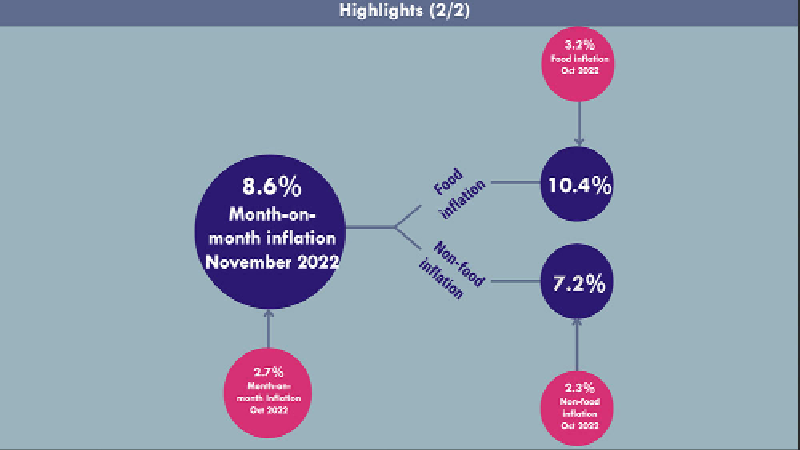 THE sharp rise in the prices of housing, water, electricity, gas and other fuels division contributed to the drastic rise in inflation for the month of November.

Collectively, these recorded an inflation rate of 79.1 per cent higher than the national average.

Inflation rate surged to 50.3 per cent in the month of November.

This is compared with the 40.4 per cent rate recorded in the country for the month of October.

It is the first in 27 years since inflation rate had gone beyond the 50 per cent mark.

The increase is also the 18th consecutive time that the rate had increased, a development which is expected to further worsen the disposal income of workers and impact the already high lending rates, among other things.

This was followed by furnishings and household equipment (65.7 per cent); transport (63.1 per cent); personal care, social protection and miscellaneous goods and services (56.3 per cent), as well as food and non-alcoholic beverages 55.3 per cent.

The education division and the insurance and financial services division recorded the lowest inflation rates of 10.7 per and 10.2 per cent respectively.

Food inflation increased from 43.7 per cent to 55.3 per cent in the month under review while non-food inflation also rose to 46.5 per cent.

Inflation for locally produced items was 48.3 per cent while that for imported items increased to 55.1 per cent.

The food inflation of 43.7 per cent was largely driven by water, which recorded an inflation rate of 93.2 per cent.

This comes at a time when the Ghana cedi is performing strongly against the major foreign trading currencies, particularly the United States dollar.

The Ghana Cedi as at the end of last week, regained about 63 per cent of its value against the US dollar.

The average interbank rate used by the commercial banks for transactions as published by the Bank of Ghana saw a dollar being bought for GH¢7.99 and sold at GH¢8.0.

The price of petroleum products, another major influencer of inflation, has dropped by an average of 10 per cent in the second window of the month while transport fares have also dropped by 15.3 per cent effective yesterday.

All these developments, among other indicators, support the fact that inflation, which stood at 50.3 per cent as at the end of November, has reached its peak and was, therefore, bound to decline.

Since the market is beginning to respond slowly, the Graphic Business can anticipate the rate of inflation decreasing at a decreasing rate for this month and at a much faster rate, all things being equal, in the first month of next year and beyond.

The Eastern Region (63.3 per cent) maintained its lead as the region with the highest inflation.

The Volta Region recorded the lowest inflation rate of 34.5 per cent.