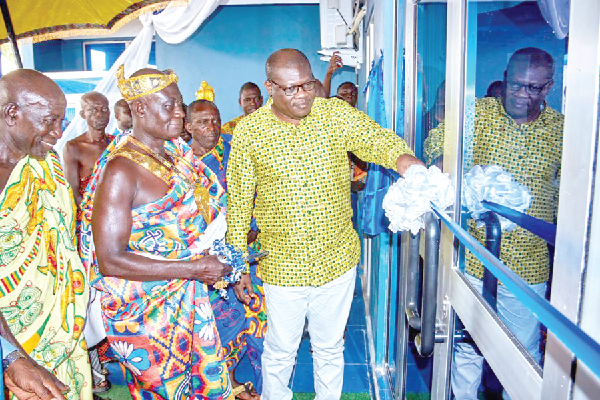 The drop, the bank said, was largely due to the change in the weather pattern that prevented majority of cocoa farmers who were granted credit facilities to expand their farms from making repayment on schedule.

In the year under review, the bank’s stated capital, however, increased marginally to GH¢ 2.5 million from the 2020 level representing a slight increase of 0.20 per cent.

In spite of the profit recorded, the bank pleaded with shareholders to buy more shares to increase its stated capital to strengthen it’s capacity to modernise operations and maintain facilities to desirable standards.


The chairman of the bank, George Osei-Ameyaw, announced this at the bank’s annual general meeting in the Eastern Region.

“The growth in shareholders’ funds was largely attributed by the net profit recorded in the year under review,” he said.

This increase was largely financed by the growth in deposits and shareholders’ funds by 1.59 per cent and 19.84 per cent to the levels of GH¢41.32 million and GH¢7.34 million respectively.”

The board chairman said the bank’s loan portfolio and investment grew by 98.00 per cent and 0.85 per cent from the levels of GH¢6.83 million and GH¢25.80 million respectively.

Mr Osei-Ameyaw said “total loans and overdraft disbursed to support various economic and personal activities in 2021 amounted to GH¢24.70 million and this recorded an increase of GH¢8.36 million or 51.16 per cent over the amount of GH¢16.34 million in 2020.

By way of the bank’s corporate social responsibility CSR), he said “Mponua Rural Bank continues to make sizable investments on that front.

In spite of the difficult economic conditions in the country, the board chairman said the bank will adopt stringent policies to ensure a sustainable growth in the maximisation of shareholders’ wealth.

“Our bank would focus on recovery of non-performing loans and institute measures to expand the loan portfolio to further stimulate the growth of economic activities in the viable sectors.

We will continue to intensify our deposit mobilisation drive and maintain strong liquidity to provide comfort for depositors,” Mr Osei-Ameyaw said.