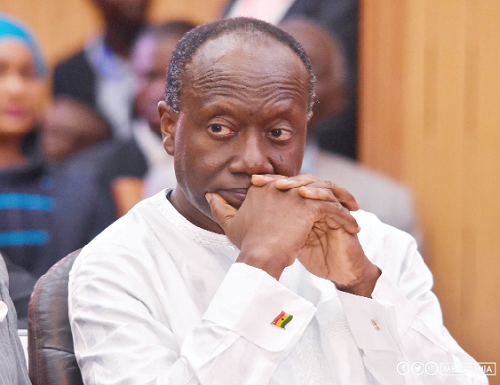 The Minister of Finance and Economic Planning designate, Mr Ken Ofori-Atta in his expenditure in advance of appropriation for January to March 2021 disclosed that a whopping GH¢12 billion has been paid as capacity charges to Independent Power Producers (IPPs) since assuming office in 2017.

He said this explained why Ghanaians have enjoyed stable electricity supply since 2017 as opposed to the excruciating rolling power cuts christened 'Dumsor' which Ghanaians endured from 2011 to 2016.

Today, many Ghanaians do not even want to hear the word dumsor and the slightest fluctuation in electricity supply reminds them of the dreaded four years of the phenomenon.

From 'dumsor' to stable electricity supply

The transformation from 'dumsor' to stable electricity supply could not have been possible without Mr Ofori-Atta’s resourcefulness to meet Ghana's financial commitments to IPPs from 2017 to date.

In addition to stable electricity, the Akufo-Addo led New Patriotic Party (NPP) government through the ingenuity of the managers of the economy supplied Ghanaians with free electricity to cushion them from the impact of COVID-19 at a cost of over GH₵1 billion and counting as lifeline consumers continue to enjoy free power to ending of March 2021.

Ghanaians had to go through 'dumsor' partly due to government’s inability to pay IPPs to keep the lights on.

One does not have to look further for a confirmation. Under persistent pressure in 2015, the then Deputy Power Minister, John Jinapor admitted that money was partly to blame for the excruciating power challenges Ghanaians endured.

In 2019, former Power Minister during the dumsor era, Dr Kwabena Donkor also admitted in an interview that money was partly to blame for the excruciating power challenges Ghanaians endured.

The economic impact were far reaching as a study conducted by the Institute of Statistical, Social and Economic Research (ISSER)  revealed that Small and Medium Enterprises (SMEs) in Ghana were losing $2.2 million daily due to the power crisis. Businesses lost $686.4m every year due to Dumsor

According to the findings, businesses lost about $686.4 million annually due to the incessant supply of electricity which has plagued Ghana over the four years.

The persistent unreliable power supply was compounded by bad Power Purchase Agreements (PPAs) that saddled the nation with huge debts in the energy sector.

Energy sector debt, a threat to the economy

Sadly, but admittedly this avoidable energy sector debt still poses a threat to the economy as it adds up to the country’s debt stock.

Through the instrumentality of Mr Ofori-Atta, government has been able to pay much of the huge debt inherited in the energy sector to ensure that Ghanaians never experienced the dreaded dumsor that brought about painful socio economic crisis to all.

The over GH¢12 billion as the cost of excess energy capacity charges inherited since 2017 was paid for electricity that the country did not use, but had to be paid anyway due to the nature of power contracts signed during the era of the past government.

60% of take-or-pay power not consumed

Currently, of the 60 per cent of 2,300 megawatts (MW) of installed capacity of electricity contracted between 2011 and 2016 on a take-or-pay basis, only 40 per cent of it is actually consumed.

Ghana has an installed capacity of over 5,000 megawatts and dependable capacity of about 4,700MW with all time high peak demand of 2,700MW.

This means that since 2017, Ghana has had to look for money to pay for about 600MW of excess capacity that was never used.

To address this inimical issue, government crafted an innovative Energy Sector Reform Programme (ESRP) to effectively deal with all key issues in the energy sector that is seen as a pillar to propel the economy Beyond Aid.

Under the ESRP, the government has begun renegotiating with IPPs to convert purchase agreements from Take-or-Pay to Take-and-Pay to put an end to the payment of excess capacity that keeps adding to Ghana's debt stock.

Though, government attempts at renegotiating with IPPAs seemed a herculean task, with the cordial relations established between the players, certainly there is light at the end of the tunnel for Ghana.

Interestingly, there's a looming danger where from 2020, the country would have to pay also for annual excess gas capacity charges of between $550million and $850 million every year due to again contracts that the previous government entered into with natural gas producers.

The costs to government would increase over time to an accumulated total of over $12.5 billion by 2023 if   business as usual in the energy sector continues.

Due to the expensive power purchase agreements that included Pay-or-Take between 2010 and 2016, electricity tariff was increased over an accumulated 268 per cent.

In the midst of persistent unreliable power supply, rising inflation and interest rates as well as fast depreciating cedi, the Public Utilities and Regulatory Commission (PURC) still went ahead to increase electricity tariffs by 59.2 per cent in 2015 to attract competitive private investment.

Once again, the basic excuse was assisting service providers to raise funds for maintenance works and avoid an immediate collapse of the distribution network.