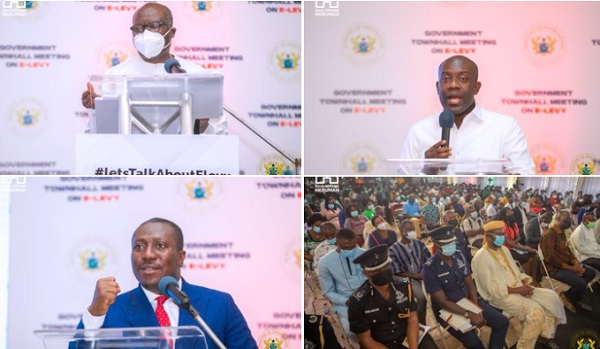 Two ministers and a parliamentarian have touted the proposed electronic levy (E-Levy) as the best option for the generation of revenue for national development.

Speaking at a town hall meeting in Koforidua, the Eastern Regional capital, the Minister of Finance, Mr Ken Ofori-Atta, the Minister of Communications and Digitalisation, Mrs Ursula Owusu-Ekuful, and the Deputy Majority Leader in Parliament, Mr Alexander Afenyo-Markin, therefore, called for support for the passage of the E-Levy Bill by Parliament.

According to them, the E-levy would rake in much-needed revenue which the government could use to accelerate the development of the country for the benefit of the citizenry.

The one-day forum, which is part of a series to sensitise the public to the rationale behind the E-Levy, which is currently facing opposition in its passage, was organised by the Ministry of Information.

It was to explain the importance of the E-Levy as a source of revenue for national development.

A cross-section of society, including market women, leaders of religious bodies, teachers and civil servants, members of the security agencies and traditional leaders, attended the forum.

Mr Ofori-Atta said the E-Levy would offer the country enough revenue to sustain and keep the government's flagship programmes on course.

He said it would provide increased revenue for investment in key sectors of the economy and support flagship initiatives in entrepreneurship and youth employment and fund infrastructural projects.

“We must find a way to what they call burden sharing. So let’s dig deep in ourselves. Nobody likes taxes, but if you look at our debt situation, we need the levy to raise our own money to build the roads we are all looking for and fund all other key government programmes in entrepreneurship, youth employment and infrastructure,” Mr Ofori-Atta said.

He alluded to how Ghana lagged behind most of its peers within West Africa as far as tax-to-Gross Domestic Product (GDP) ratio was concerned, saying while Ghana was doing below 15 per cent, countries in the sub-region, such as Cote d'Ivoire and Nigeria, were hovering around an average of 18 per cent.

The minister said with dwindling revenue streams attributable to the slowdown in business activities occasioned by the COVID-19 pandemic, the government, through the 2022 Budget Statement and Economic Policy, introduced the E-Levy to help the government to shore up its revenue inflows to fund projects.

Throwing more light on the levy, Mr Ofori-Atta explained that when passed, it would increase Ghana’s tax-to-GDP ratio from 13 to 16 per cent, indicating that the proceeds from the levy would be used to support government programmes, such as the YouStart, and fund road projects.

He allayed the fears of Ghanaians that the E-Levy would collapse their businesses, saying it would rather promote them.

Mrs Owusu-Ekuful, who set the ball rolling, drew similarities with the Communications Service Tax (CST) introduced in former President John Agyekum Kufuor’s administration in 2008, and said when it was introduced, it faced similar opposition as the E-Levy.

However, in spite of the stiff opposition to the CST, many years on, Ghanaians had realised that the dangers raised against the CST were unfounded, as it had become a major source of revenue for the government.

She gave an assurance that based on the country’s experience with the CST and lessons from other African countries, the government was confident that the E-Levy would not bring about any negative changes in consumer behaviour, as was being speculated by industry players and people opposed to the levy.

The minister said the E-Levy would be more reliable for the payment of existing contracts.

She added that proceeds from the levy could also be used to train the youth in employable skills, as well as provide start-up capital for those interested in setting up their own businesses.

That, Mrs Owusu-Ekuful noted, would help reduce the unemployment rate in the country.

She said the E-Levy would also widen the tax net in the informal sector by up to 85 per cent.

In his contribution, Mr Afenyo-Markin expressed the hope that with the consultations carried out among stakeholders, the Minority Caucus in Parliament would support the bill when it was laid before the House.

Later in an interview, a 42-year-old trader, Ms Margaret Amissah, said at first she did not understand the issue, but after listening to the panellists, she would be in a position to explain to her colleague traders the benefits of the E-Levy.

She called for more education on the issue to gain support from the public.

The Head Pastor of the Royal Life Family Ministry, Rev. Dr Michael Owusu Tagoe, and Bishop Samuel Yaw Adu of the House of Prayer, Koforidua, called on the government to educate the clergy on the issue to enable them to impart that knowledge to their congregants.