What will motivate a woman of great intellect, professional achievements and honour to take time off her busy schedules, travel to East Africa – Tanzania to be specific – climb and descend Africa’s highest mountain – Mount Kilimanjaro?

For many, that is a crazy expedition not worth the time and resources. For Dr Esi Ansah of the Ashesi University, however, it is a sign of internal fulfillment, an opportunity to dare and a step into the extraordinary.

To help push herself out of that comfort zone and also raise funds to write the biographies of some senior citizens, she travelled to Tanzania, where she successfully conquered Mount Kilimanjaro, the 5,895-metre tourist site that shares borders with Kenya.

Her successful climbing of the mountain made her one of the few women globally to have braced the odds and climbed the continent’s highest highland.

She told Albert Ocran on the weekly motivational show, Springboard, Your Virtual University, that the action was inspired by an internal desire to go beyond the ordinary.

“I decided to do something absolutely daring, something that was way out of my comfort zone and something that is out of the normal old ways of things,” Dr Ansah, an Assistant Professor at the Ashesi University, said.

Dr Ansah also mentioned Princess Umu Hatiyya, a celebrated Ghanaian novelist, who once cycled from Accra to Tamale (a journey of about 650 kilometres), as one of the people who inspired her to take the bold step to climb Mount Kilimanjaro.

Although Dr Ansah had planned to conquer the mountain with Princess Hatiyya, she said a last minute emergency derailed that plan, forcing the university lecturer to undertake the journey alone.

Preparing for the journey

Prior to conquering Mount Kilimanjaro this year, Dr Ansah, who lectures human resource development at the Ashesi University, had participated in the 2014 Accra Marathon, where she covered 10 kilometres non-stop.

Having successfully done a race on a levelled field, she said it was time to do uphill, where her energies and aspirations would further be tested and fulfilled.

This, she said, informed the decision to choose Mount Kilimanjaro over other tourist sites in and outside the country.

After making the choice in December 2014, Dr Ansah said she zoomed into preparing for the momentous and eventful day, which finally came in April.

“Leading up to the time, I think I was more excited and scared but once you have booked the ticket, made the payment and it was time to go, there was no turning back. There were a few people who tried to discourage me but I saw it as a commitment. I said I was going to do this and I was doing it for a purpose, then I just had to do it,” she said on the show which was meant to celebrate her exploits.

It was a continuation of the series on entrepreneurship and business growth, which has been running for the past three months.

Touching on her preparation prior to the journey, Dr Ansah said she registered with a local gym to keep her body in shape prior to the big day.

The preparation also involved logistical, physical and emotional, all of which helped in getting her ready for a journey that she would always relish.

It also included reading about the mountain and climbing, which she said led her to discover many things about the expedition. 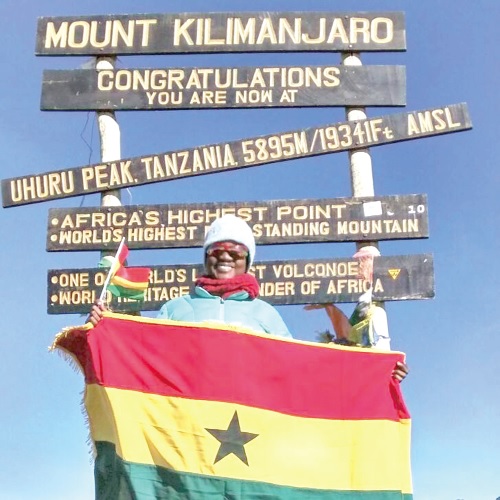 Having concluded preparations for the journey, Dr Ansah, who is also the Chief Executive Officer of Axis Capital, a human resource development company, said she set off to Tanzania, where she met other climbers for the tedious but inspiring task.

She admitted that the exercise was tough and the associated stress caused her to contemplate quitting at a point.

“But because I had told people I was climbing Kilimanjaro for a purpose, even if I wanted to turn back, there was no turning back. When you are climbing, it is tough so the mountain guides keep telling you ‘Pole Pole’; take your time, slowly and easily. Also, your body needs to get used to the altitude else it runs into acute mountain sickness,” she said.

“For four days, we trekked towards the base of Mount Kilimanjaro, walking sometimes, for four hours, sometimes for seven hours, stopping to rest in camp sites along the way.

“On the fifth day, we started the final climb at midnight and after shuffling through the darkness for about eight hours, cold, hungry,  tired, frustrated but undeterred, fueled by my commitment to senior citizens, my many supporters and the need to create authentic,  African, I reached Uhuru Peak (19,341 feet or 5,895 meters above sea level,” she said.)