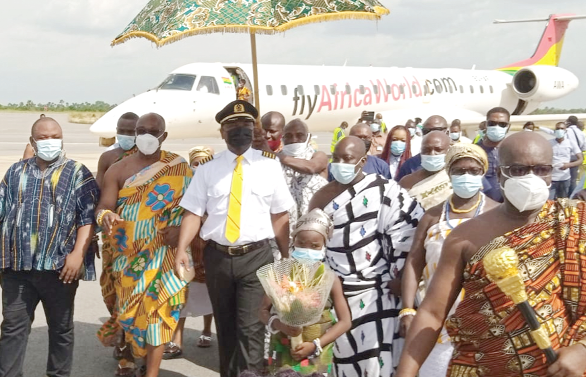 The 50-capacity Embraer-145 aircraft landed at the Ho Airport after 22 minutes of takeoff at the KIA.

Piloted by Captain Kwasi Oteng, with Captain Edward Pratt as the co-pilot. the Embraer-145 took off from the KIA at 1:58 p.m. and landed at the Ho Airport at 2:20 p.m.

The Agbogbomefia of the Asogli State, Togbe Afede XI, who is the Founder and Co-Chairman of AWA, described the occasion as unique and a dream come true.

Stakeholders in the aviation industry, including Togbe Afede, the Managing Director of the Ghana Airports Company Limited (GACL), Mr Yaw Kwakwa; the Deputy Director General in charge of Technical at the Ghana Civil Aviation Authority (GCAA), Mr Daniel Aquah, and other dignitaries joined the flight.

The Volta Regional Minister, Dr Archibald Yao Letsa; traditional leaders and scores of indigenes from far and near went to the new airport to witness the historic flight.

They could not hide their joy about the beginning of air travel to and from the Volta Regional capital.

Togbe Afede described the Ho Airport as a sub-regional asset, saying the benefits to be accrued from its operation were without doubt.

"This is not only for the people of the Volta Region; it is for all of us from Ghana and beyond," he stated.

He said even before the operationalisation of the airport, it had served a lot of purposes, including supporting emergency evacuations and security operations.

"From today, we expect that ordinary passengers will be able to travel from here to Accra in a journey that will last 20 minutes, which means that the travelling time between here and Accra will be cut short,” he told the excited gathering.

Togbe Afede called for the patronage of AWA flights, as they were a cheaper option, in cognisance of rising fuel prices.

"I will encourage all of us to take advantage of this, by not only those who go by passenger busses but also those who drive their own cars. I think that this is a more economical way of travelling to Accra, more efficient and more convenient," he stated.

He expressed gratitude to former President John Dramani Mahama for his foresight in siting the airport in the Volta Region and extended same commendation to the current government and the major stakeholders for keeping the dream alive and putting in the necessary measures to ensure that its operation took place.

The airport, he indicated, would serve important purposes, including serving as a springboard to boost the tourism sector in the region and other sectors of economic importance.

"Already, we have received calls from groups who want to charter AWA for travel between Accra and here and we expect a lot of those to happen between Ho and other cities, not only in Ghana but within the sub-region," he said.

Togbe Afede emphasised that the outlook was full of excitement and urged the public to patronise AWA flights to pave way for multiple daily flights.

Beyond commercial operations to Ho, Togbe Afede said plans were far advanced to establish an aviation training institution, with support from the GACL, the GCAA and the government.

That, he said, would enhance the economic viability of the airport and offer training opportunities, to the benefit of not only Ho but the nation at large.

Mr Kwakwa said the first test flight to the airport would allow the airline operator and the GACL, managers of the airport, to undertake final preparations towards actual commercial flights, which date was currently being discussed.

“We are here to let you know our preparedness to operationalise the Ho Airport for commercial activities in the days ahead. We are grateful for the enthusiasm that the region has shown with this large crowd of people to witness this historic flight. We want this enthusiasm to grow to help improve patronage when the airport starts receiving commercial flights,” Mr Kwakwa said.

Beyond AWA, he said, another private airline operator, PassionAir, had also indicated its interest to start flying to Ho.

“So very soon it will not be only AWA but also PassionAir. We are still discussing specific date that the airlines will start commercial operations,” he added.

Dr Letsa expressed the hope that commercial flights would follow soon to allow for tourists, business people, students, lecturers, health professionals and investors to have a smooth journey to and from Accra.

He said the $25-million airport had the capacity to contain the traffic and hoped that patronage would be high enough to increase flights from weekly to daily.