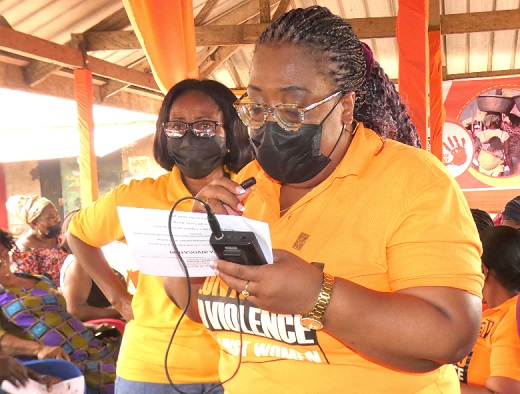 The Coordinator for Domestic Violence and Victim Support Unit (DOVVSU) at the Nima Police Station, Assistant Superintendent of Police (ASP), Mavis Adjei, has advised young girls and head potters (Kayayei) to stay vigilant and protect themselves from sexual predators and sexual activities.

That, she said, would open more opportunities for them to build themselves and their communities.

She urged the young girls to see DOVVSU as an extended family and report cases of violence and sexual harassment immediately they experience it.

ASP Adjei was speaking at the launch of the "Say No to Violence Against Women and say No to Teenage Pregnancy”, initiative at the Mallam Atta Market in Accra last Wednesday.

She added that victims, when raped, should immediately report to the police station without washing up to show as evidence for medical examination which would further aid investigations.

The CEO of CHACDET, Ms Sedinam Mammara, also stressed the need for girls to get vocational skills, which would help them generate some income and make them independent.

She said by that the girls would be empowered and add value to their lives.

"We always believe that women should always have vocational skills. When you don't have any skill, it would be difficult to generate money to take care of yourself and your family," she said.

She added that by acquiring vocational skills, the girls would not be lured by men into sex, which could lead to teenage pregnancy.

“If you have vocational skills which you can depend on, I don't think the men will need to give you one cedi to sleep with you. So it's really about getting vocational skills and empowering yourself" Ms Mammara stressed.

A Public Health Nurse from the GHS, Madam Mavis Faanye, also entreated the girls to desist from sexual activities at a young age as they risked contracting sexually transmitted infections and unwanted pregnancies from unprotected sex.

The Queen mother for the Mallam Atta Market, Asafoanye Ogbedei, revealed that some years back, the market did not have so many young kayayei’s as they did now.

The President for the Zonta Club, Mrs Lydia Dsane-Selby, mentioned that teenage pregnancy and gender-based violence within young girls was a worrisome situation that needed to be tackled hence the advocacy against such societal vices and issues.