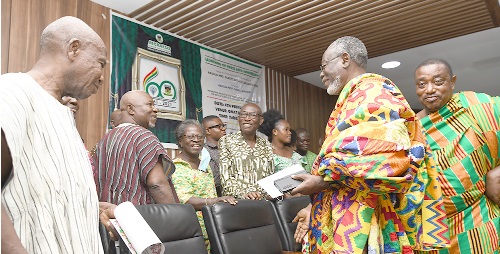 Nana Abra Appiah (right), Krontihene of Mpraeso, interacting with some members of the Old Students Association during the launch of the 60th anniversary celebrations of the school. Picture: EBOW HANSON
30.5k Shares

The Deputy Managing Director of East Cantonments Pharmacy Limited, Gladys Bediako Amoafo-Hene, has said the promotion of science, technology and innovation in Mpraeso Senior High School (SHS) is critical to tackling the problems associated with the COVID-19 pandemic.

She stressed the urgent need for the school to refocus on the science, technology, engineering and mathematics (STEM) subjects, adding, “our school, in times past, was a science resource centre; unfortunately we could not leverage the position of the school well as a science school.”

Mrs Amoafo-Hene said this as chairperson of the launch of the school’s 60th anniversary.

She said the pandemic had occasioned the need to relook at the school’s admissions policy vis-à-vis the government’s policy and to position the school to admit more science students to meet the increasing global demand for such skills.

The headmistress of the school, Ms Letitia Atua-Baadu, expressed her gratitude for the continuous support of the chairman, the board of governors, the alumni (MPASSPAST) and the parent-teachers, association.

“I acknowledge the hard work and dedication of both the teaching and non-teaching staff, who have braved the odds, lived like our missionaries of old and endured hardships to bring the school to its current level,” she said.

Ms Atua-Baadu also stated that the 60th Speech Day would offer the best opportunity to showcase to the world the school’s achievements and how far it had come.

She added that it would also serve as a platform to come together as a family to honour the “illustrious sons and daughters of mother MPASS as well as all those who have contributed in diverse ways to ensure our present prestige”.

The Dean of the School of Medical Sciences (SMS) of the Kwame Nkrumah University of Science and Technology, Professor Daniel Ansong, who officially launched the anniversary, said the pandemic had disrupted economies as well as schools’ activities across the world, but he was confident that the management, with the support of the alumni and the governing body, would successfully face those challenges.

In a brief address, the Kontihene of Mpraeso Nana Abra Appiah stated that the school was one of the best for students who wanted to end up as businessmen and women, adding that the school had produced some of the most and successful business people in Kwahu.

He also assured the support of the Mpraeso traditional leadership to the school, saying they would always be at their service. He added that there was the need to promote the Ghanaian culture and inculcate our traditions into the educational system.