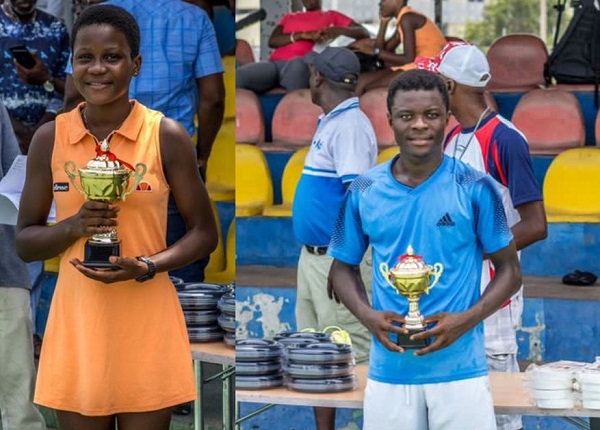 The girl's number one seed for the National 18 and Under Championship, Tracy Ampah of Goldfields Tennis Club Tarkwa and Atomic Tennis Club’s Emmanuel Antwi emerged champions of the tournament which took place last Friday at the National Tennis Centre, Accra.

After Sisu took a 3-1 lead in the early set, Tracy regrouped herself to level things up at 3-3. Both players took their serve to 4-4. Tracy spirited with fine strokes and volleys saw Sisu uncharacteristically sloppy, hitting unforced errors.

In the second set, Sisu looked more aggressive and took a 3-0 lead, but Tracy regained her composure to turn the match back in her favour. Tracy, shouted with delight when she clinched the title with a cross-court forehand winner.

After losing to Sisu in the 2nd edition of Sidney Katz Junior tournament, Tracy has now claimed two major titles (Ladies Challenger Series 2 and the just ended 18 and under Championship) this year.

Speaking to the Junior Graphic after her win, Tracy said: "This is a dream come true for me. I am so proud to have won the title. I want to thank the tournament organizer Mr. Amoako for organizing this event, my school Accra Girls Senior High and Goldfields Tennis Club for their support".

In the boy’s final, Emmanuel Antwi defeated Desmond Ayaaba 7-6(1), 6-3 to clinch the title of best under-18 boys tennis player in the country.

Antwi looked comfortable and never allowed Ayaaba to take the initiative. Ayaaba was forced into doing most of the chasing and looked second best.

A sliced backhand by Ayaaba, which drifted wide, helped give a buoyant Antwi a 2-0 lead in the second set.

But the Ayaaba broke straight back and then dug deep to make it 2-2 and there was not much between the two players.

Ayaaba started to look more aggressive but each time he threatened, Antwi responded and with the crowd thrilled by the skills on show, he held serve to move 4-3 ahead.

In an interview with the Junior Graphic, Antwi said, “I'm playing with great joy and concentration and I hope to continue. This has been a very exciting week and today was my best match. It's always a big challenge to play Ayaaba and obviously, I'm very pleased."