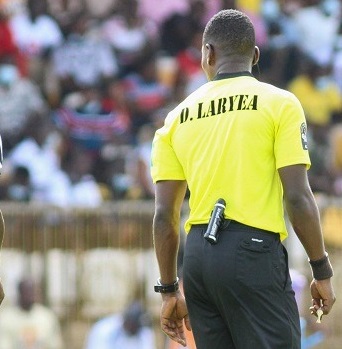 The Head of Referees at the Ghana Football Association (GFA), Alex Kotey, has praised Ghana's foremost FIFA referee, Daniel Laryea, for his splendid performance in last Sunday's Ghana Premier League super clash between Hearts of Oak and Asante Kotoko at the Accra Stadium.

According to Mr Kotey, it is always a credit to a referee not to be a subject of controversy after an important game.

"I think that he did very well as the leading referee in the country; his performance was good and normally if you officiate a game and there are no controversies then it tells you that the performance was okay," Mr Kotey told the Daily Graphic in an interview yesterday.

Mr Kotey, however, noted that he was surprised Laryea did not wear his signature uniform which had been a regular feature this season. That shirt had Laryea's name behind it but he used a nameless referee’s kit last Sunday.

He further disclosed that referees’ kits with names behind the shirts were first introduced by the Confederation of African Football (CAF) for all referees during the 2020 African Nations Championship (CHAN) in Cameroon, a tournament in which Laryea officiated.

He said: "So when you see him using any of the CHAN uniforms, then, of course, his name will be on that shirt and so that is what happens. It is an initiative of CAF which started at the CHAN tournament.

“It is not a law, it was an initiative of CAF for that CHAN tournament," the retired FIFA referee explained.

He said his outfit would consider the rationale behind CAF's decision before deciding whether to make it compulsory for referees in Ghana.