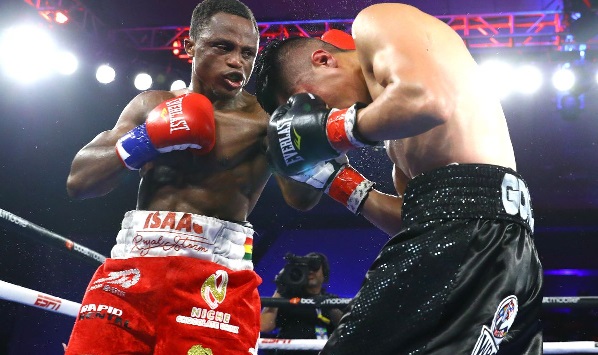 The former WBO junior featherweight champion got off to a strong start, withstood Gonzalez’s rally in the later rounds and won a 10-round split decision in a main event ESPN+ streamed from Grand Casino Hinckley in Hinckley, Minnesota. Ghana’s Dogboe won their back-and-forth fight 96-94 on the scorecards of judges Tim Cheatham and Mike Fitzgerald.

"I wanna say a big thank you to Joet Gonzalez," Dogboe told ESPN’s Bernardo Osuna during his post-fight interview. "He’s a true warrior. And, you know, his team, they prepared him really well."

Ghana’s Dogboe (24-2, 15 KOs) at least put himself in position to fight Emanuel Navarrete a third time by beating Gonzalez, who entered the ring ranked number one among the WBO’s contenders for Navarette’s 126-pound championship. Dogboe is ranked second by the WBO at 126 pounds, but he will become Navarrete’s mandatory challenger after defeating Gonzalez (25-3, 15 KOs).

Mexico’s Navarrete (35-1, 29 KOs) could move up to the 130-pound division, however, after an optional defense of his WBO featherweight title against Eduardo Baez (21-2-2, 7 KOs) on August 20 at Pechanga Arena in San Diego.

Navarrete upset Dogboe by unanimous decision in their first fight to win the WBO junior featherweight championship in December 2018. Navarrete won their immediate rematch in May 2019 by dropping Dogboe twice and stopping him in the 12th round.

Dogboe, 27, has won four straight fights since Navarrete beat him in their rematch. If Navarrete gives up his WBO belt, Dogboe will likely face another highly ranked contender for that unclaimed championship.

Dogboe-Gonzalez was a WBC elimination match, but the fifth-ranked Dogboe is not expected to become the WBC’s mandatory challenger for its newly crowned featherweight champion, Rey Vargas (36-0, 22 KOs), after defeating the fourth-ranked Gonzalez.

The 28-year-old Gonzalez, meanwhile, lost a non-title fight for the first time in 10 years as a pro. Prior to Saturday night, the Glendora, California native had only lost unanimous decisions in WBO featherweight title fights to former champ Shakur Stevenson (18-0, 9 KOs) and Navarrete.

CompuBox credited Gonzalez unofficially for landing seven more punches overall (197-of-549 to 190-of-783).

Gonzalez and Dogboe spent almost all of the 10th round trading hard punches on the inside. Both boxers landed to the body and head, but neither fighter appeared hurt at any point in those three minutes.

Dogboe caught Gonzalez with a left hook just after the halfway point of the ninth round. Another left hook by Dogboe made Gonzalez reset his feet about 10 seconds later.

Gonzalez and Dogboe traded hard shots from close distances during a fan-friendly final minute of the ninth round.

Gonzalez’s left hook rocked Dogboe with about 1:20 to go in the seventh round. Almost 20 seconds later, Gonzalez caught Dogboe with a left uppercut.