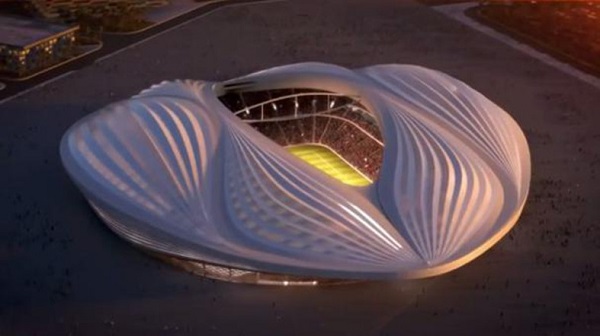 Of the eight stadiums being used to host games at the FIFA World Cup Qatar 2022, one has caught the eye of football fans from across the world for its unique exterior design.

The 44,325-capacity Al Janoub Stadium is located in the southern city of Al Wakrah, 22km south of central Doha. The city is one of Qatar’s oldest continuously inhabited areas.

An innovative cooling system and retractable roof mean the stadium can be used all year round. It was designed by AECOM and Zaha Hadid Architects.

The stadium’s captivating design reflects the wind-filled sails of Qatar’s traditional dhow boats – a tribute to Al Wakrah’s fishing and pearl diving past.

However, the stadium is more famous among fans for its similarities in appearances to female genitalia.

It has therefore been nicknamed "Vagina" Stadium by fans across the globe.

The stadium was designed by Iraqi-British architect, artist and designer Dame Zara Hadid.

According to Hadid, her inspiration for the design was the flowing shape of a dhow sailing boat as well as traditional Arabian pearl diving and a fishing vessel.

She also lashed out at comparisons of the facility to female genitalia.

"It's really embarrassing they come up with nonsense stuff like this," she said. "What are they saying? Everything with a hole in it is a vagina? That's ridiculous."

The stadium has already hosted five games at the World Cup and will host the final Group H game between Ghana versus Uruguay, as well as one round of 16 fixture.

After the tournament, Al Janoub’s capacity will be reduced to 20,000, with seats donated to other football development projects overseas.

Qatar hopes, the reduced capacity will guarantee an electric atmosphere for the matches of local side Al Wakrah SC.

Beyond football, the venue’s is surrounded by luscious parkland featuring sport and leisure facilities which will benefit the whole community for years to come.

It features cycling and running tracks, children's play areas and other green spaces. Eventually, there will be a marketplace and community facilities, including a mosque and a school.

How to get there

Al Janoub Stadium is served by a network of new expressways and roads which provide easy access to residents and visitors to both Al Wakrah and Doha.