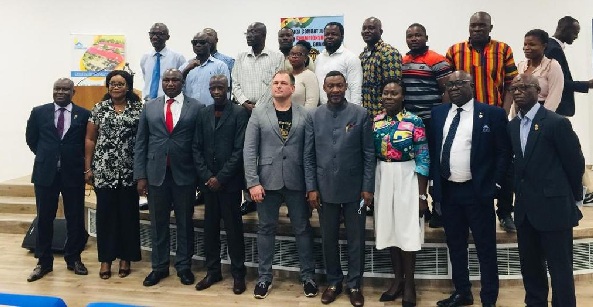 Officials of GJJF and EXIM Bank after the event

According to the General Manager of EXIM Bank, Mr Issac Amissah, his outfit was ready to financially assist the GJJF to ensure Ghana welcome the rest of the continent for the 2022 edition of the competition.

Addressing a GJJF delegation on Tuesday, Mr Amissah, who spoke on behalf of EXIM Bank’s Chief Executive Officer, Mr Lawrence Agyinsam, explained that his outfit was ready to sponsor the African championship if the National Sports Authority (NSA) would give its approval.

Mr Amissah said it is in the interest of the company to help in youth development and believes jiu jitsu provides an avenue for the youth to remain healthy.

“We are ready to support the federation to host next year’s Africa Championship if the NSA would give its green light for Ghana to host it.

“Supporting youth development remains one of the company’s targets and we believe jiu jitsu offers the youth the platform to live a healthy lifestyle,” he said.

Mr Evans Bernie Johnson, vice president of the GJJF, said the country has a bright chance of winning more laurels in the sport if the NSA could approve their decision to host the African championship.

“Our efforts and enthusiasm in Ukraine for the world championship yielded results when we came back home with laurels and I believe gaining the chance to host the African championship in Ghana would bring more honour,” said Johnson.

For his part, the Deputy Director General in charge of Technical at the NSA, Mr Kwame Amponfi Jnr, asked the GJJF to process all documents for the hosting rights in time to enable them gain approval from the NSA.

“We have to applaud EXIM Bank for their support to combat jiu jitsu sport in Ghana.

“I want to urge the federation to process all documents in time to be able to gain approval from the NSA to host the Africa championship,” Mr Amponfi Jnr noted.