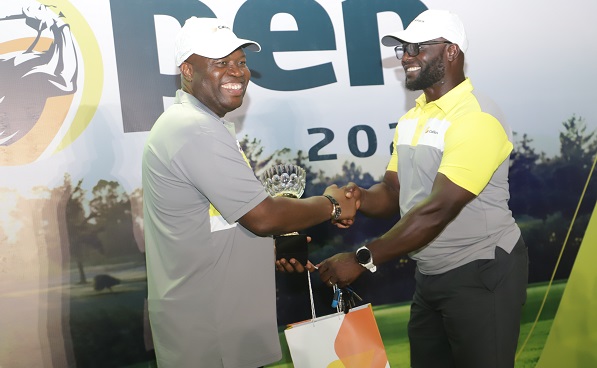 Playing with a handicap of 17, the Dwomoh showed why he is gradually becoming a strong force in the sport as he shrugged off competition from his challengers to finish with 46 points.

Similarly, Niine Inkumsah Sarpong stole the show in the ladies category when she outclassed her competitors to be crowned champion.

With a handicap of 27, the lady golfer proved superior on her strokes to eventually record 40 points to win the competition.

Charles Dzikunu also romped to a resounding victory in the men’s Group A category recording a net score of 42 points with a handicap of three to beat Yao Dogbe on countback.

The thrilling contest, which saw some top golfers jostling for the ultimate, it was Eric Erickson who managed to pick the third slot, having recorded 40 points with a handicap of five.

In the men’s Group B, Philemon Atuahene Andoh won with a net score of 40, followed by Clement Ofosu-Ntiamoah who bagged 39 points and Layi Akona finished third with 36 points. The ladies Group B also saw Christabel Oppong bagging 37 points to win, followed by Elizabeth Essel-Koomson and Sarah Jiang Yang who scored 33 and 32 points, respectively, to follow in that order.

The Professionals category also saw Quarshie Attiso picking the top spot with a gross score of 141 beating his challenges on countback with Joseph Klah and Korblah Degbe following in that order with 141 points each.

Yao Dogbe picked the Longest Drive in Hole 17 in the men’s category with Niine Inkumsah Sarpong wining the ladies category.  Charles Dzikunu was picked Closest to the Pin award while Jullite Afi A

The Managing Director of CalBank, Charles Owiredu, promised to partner Achimota Golf Club to grow the sport in the country, adding that its staff who play golf are scattered over the country.

“We would work with our clients in times of challenges that is where our clients need our support to be able to ride the storm with them”, he said.