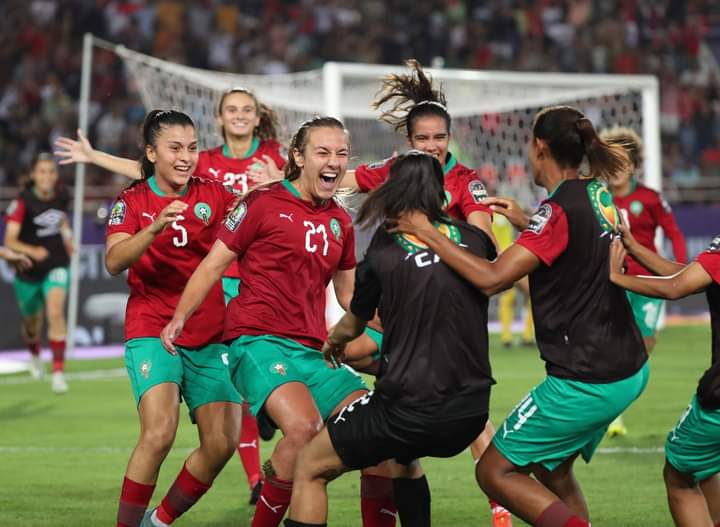 In the finals! The Atlas Lionesses hoping to make history Follow @Graphicgh

Hosts, Morocco got themselves a dream final berth and kept alive hopes of hosting and winning their first Women’s Africa Cup of Nations (WAFCON) title, outfoxing title holders Nigeria on penalties after a gusty 1-1 draw in 120 minutes.

Champions die hard, it is said, and that was the story on the night at the 53,000 capacity Prince Moulay Abdellah stadium, as the Super Falcons, depleted to nine players by the 71st minute, held off the barrage of attacks from the Atlas Lionesses, endured the extra time of 30 minutes, before bowing out 4-5 on penalties.

In a typical game between holders and a determined hosts, there was never a dull moment in the game right from the blast of the whistle by Mauritanian Referee Maria Rivet.

It also saw some never to be forgotten sticking points - the first time a semi-final game had seen two players sent off as Nigeria's Halimatu Ayinde (48th) and Rashedat Ajibade (71st) for similar fouls after VAR had judged their attempts to clear a ball as dangerous stamping, as well as the game being pushed into extra time but unable to produce a winner for the game to be decided on penalties.

Touted as a David and Goliath affair ahead of the game for the profile and pedigree of the two sides, on the pitch it was a different story and as had been seen in this competition, the Moroccans as usual, started off with their fast-paced and intense note, but the Nigerians warded off that pressure and in no time, took charge.

Those fierce exchanges that excited the filled-up stadium, as the home fans cheered to urge their side on, did not produce any goals as the first half ended.
Morocco resumed the second half with the same intensity, putting Nigeria under pressure and in a bid to go in for a tackle, Halimatu Ayinde went in hard and Referee Rivet, with the help of VAR, showed her red for the marching off orders.

That momentarily caught the holders off guard, but they quickly regrouped and in the 62nd, a thunderbolt from Ajibade was headed clear by Morocco defender Yasmin Mirabet.

The goal was a welcome breather for the Nigerians but it stunned the entire stadium into total silence until the 66th minute when the home fans found their cheering voices again, celebrating the equaliser from Sanaa Mssoudy.

Spurred on by that effort, the Moroccans at this point decided to carry the game to the Nigerians and while it didn't yield much results, it gave them an advantage because the holders' live wire, Ajibade saw red after Referee Rivet, satisfied by what she had seen from the VAR, called the Atletico Madrid forward aside and showed her the red card.

Playing with the numerical strength, the Lionesses took charge, roaring louder and pushing the Falcons to the sword, but the nine- time Champions showed their grit and resilience in defence and also by the bravery of goalkeeper Chiamaka Nnadozie to push the game into extra time.

Hanging on to that lifeline, Nigeria coach Bruce Waldrum exhausted his substitution and deep into the second half, final substitute, Gift Monday almost lived by her name, striking a long range thunderbolt only to be denied by the crossbar much to the relief of the Morocco bench and their teeming fans.

Game over but with winners to be declared, Referee Rivet prepped the two sides for the shootouts and it was the Moroccans who survived to join the list of WAFCON hosts to ever play in the final after Nigeria, South Africa (2000) and Equatorial Guinea (2008) and only the third time a host had beaten Nigeria in the semi-finals.

The outcome of this semi-finals has set up a Morocco versus South Africa final and with that a new champion to be crowned on July 23.