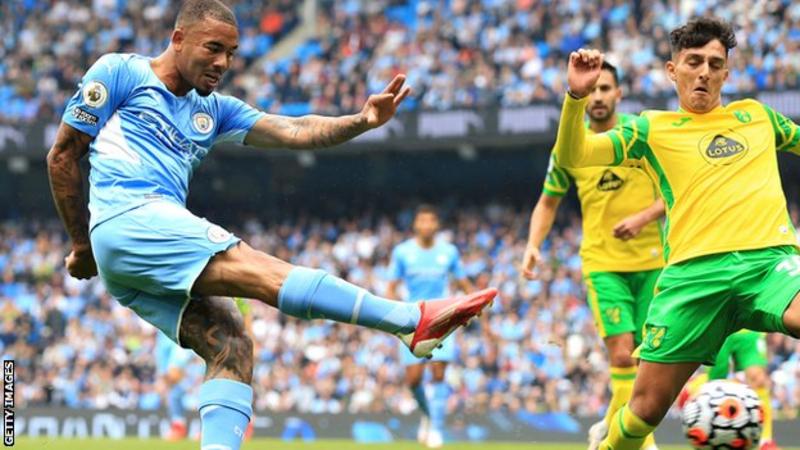 Pep Guardiola highlighted Gabriel Jesus' "incredible importance" to Manchester City after he stole the show from £100m man Jack Grealish in the champions' demolition of Norwich.

Grealish opened his City account on his Premier League home debut, one of three goals Jesus laid on for his team-mates against the outclassed Canaries.

The Brazil striker has been linked with a move away from Etihad Stadium as a way of opening up funds for the purchase of Harry Kane from Tottenham but Guardiola was thrilled with Jesus's contribution from the right side of the attack.

"If one person deserves respect and prizes and everything, it is him [Jesus] because he never complains. He is fantastic and all of us have to learn from him," the Manchester City manager told BBC Sport.

"He has so much importance for me. It's not just when he makes an exceptional performance like today, it's every day," Guardiola added.

"One of the reasons why I am a manager in the best moments of my career, apart from the titles and trophies, is because you can work with people like Gabriel. He is an incredibly important player for us."

Grealish grabs glory but Jesus shines brightest
England midfielder Grealish ingratiated himself with his new adoring fans thanks to his goal and typically busy display, but it was Jesus who unlocked the Canaries' cage to ensure this was a stroll.

His clever movement, control and delivery created three of City's five goals, all from low, inviting balls across the face of the six-yard box that wreaked havoc among the Norwich defence.

There was some fortune about the first two as Grant Hanley's attempted clearance flew in off Norwich keeper Tim Krul before City's second bounced in off Grealish's knee.

However, the lead was just reward for the imperious hosts, who saw a neat Ferran Torres finish chalked off in-between those goals after the video assistant referee noticed Bernardo Silva's clip on Milot Rashica in the build-up.

Aymeric Laporte added the third, steering home a corner from close range, before Jesus guided Kyle Walker's through ball into the path of Raheem Sterling for the substitute to sweep home City's fourth.

Riyad Mahrez also came off the bench to round off the rout, beating Krul one-on-one as City emphatically put any lingering worries over three successive defeats - this season and last - behind them.

Bigger tests, of course, await with Arsenal, Leicester, Chelsea and Liverpool among their next five fixtures - with defeats in the Champions League final, Community Shield and league to Chelsea, Leicester and Tottenham respectively still relatively fresh in the mind.

"One week ago, we are not contenders to win the Premier League. Now we are scary!" smiled Guardiola.

"Listen, we are same team except for Sergio, who went to Barcelona, and Jack coming in. We are the same guys and the same team we were last season - and last season was exceptional."

Only two teams - Leicester in 2001-02 and Wigan in 2010-11 - have had a goal difference worse than Norwich's of minus eight two games into a Premier League season but they will take some solace that Liverpool and City are already out of the way, until next year at least.

This scoreline was a repeat of Norwich's most recent visit there in July 2020, which came just 10 months after they provided one of the most memorable all-time Premier League surprises by beating City 3-2 at Carrow Road.